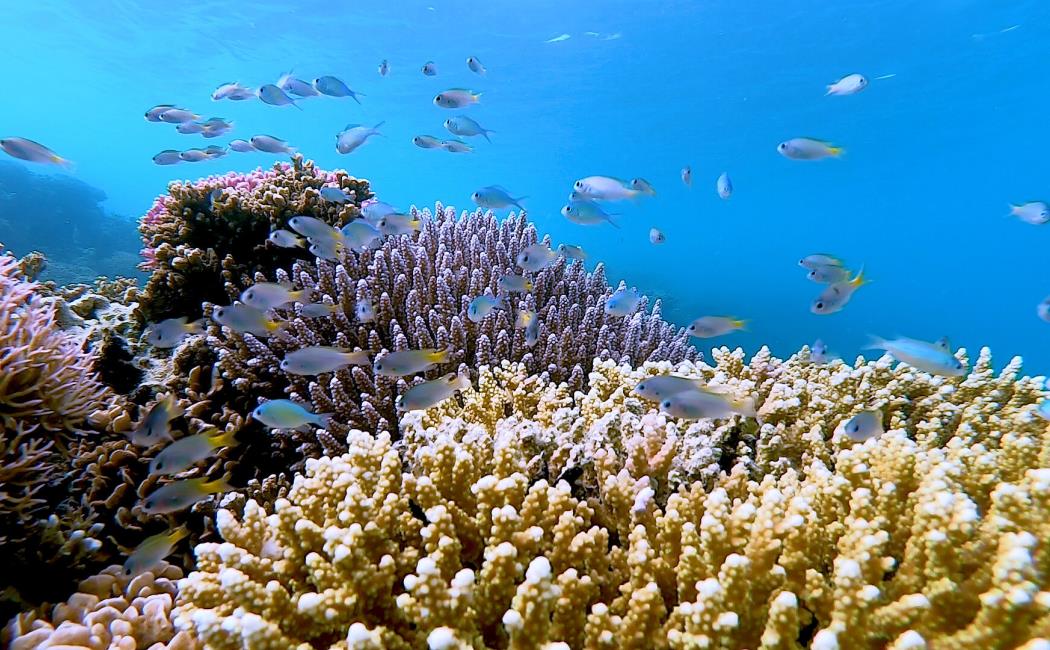 Published in Science Advances, August 13, 2021, the paper finds that Beneficial Microorganisms for Corals (BMC) help corals recover from thermal stress in a number of ways, chiefly by stimulating immune processes that help them rebuild their microbiome environment and offset post-heat stress disorder (PHSD) symptoms driven by thermal stress. It details research conducted at the Federal University of Rio de Janeiro (UFRJ), Brazil, where the scientists were formerly affiliated, and includes analytical data from subsequent tests done at the KAUST Red Sea Research Center. 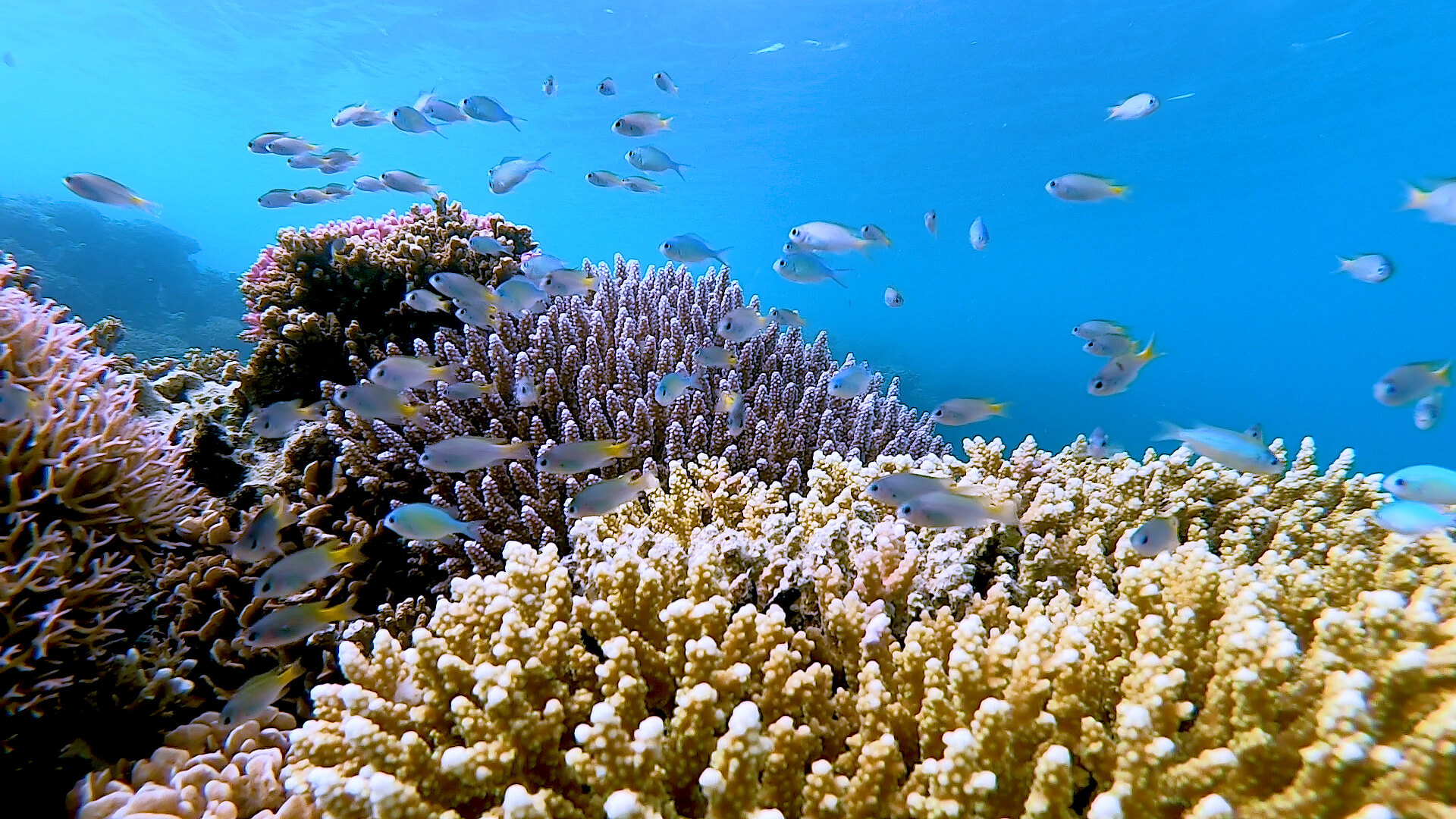 A healthy symbiotic relationship between the coral host and algae that live in the coral is the foundation of reef ecosystems and helps keep reefs in stasis. Photo: KAUST

The paper is the first of its kind to show that probiotic "medicine" can protect bleached corals from death. The study received funding from the Great Barrier Reef Foundation's Out of the Blue Box Reef Innovation Challenge, which called for new ideas to protect coral reefs. It was supported by the Tiffany & Co Foundation.

Great Barrier Reef Foundation Managing Director Anna Marsden said, "Pioneering science such as this provides hope for the future of the Great Barrier Reef and coral reefs globally, which are coming under increasing pressure from climate change."

A need for protection

The photosynthetic algae that live in coral polyps produce more than 80% of the carbon compounds that corals use as a source of energy. They also give the corals their signature color. In return, corals provide protection and nutrients. This symbiotic relationship is the foundation of reef ecosystems and helps keep reefs in stasis.

Coral bleaching is a dire phenomenon afflicting reefs around the world. Scientists theorize that high temperatures and light damage the photosynthetic apparatus of the algae, causing them to produce high amounts of reactive oxygen species (ROS), which are highly reactive and toxic to both the algae and coral host.

Under these circumstances, corals can expel the algae. If they do, the corals' energy (and color) drains, and they slowly starve if conditions persist. Bleaching is a signpost of this process. Depending on the duration of the thermal event and weather conditions improve, the algae will either return or not. 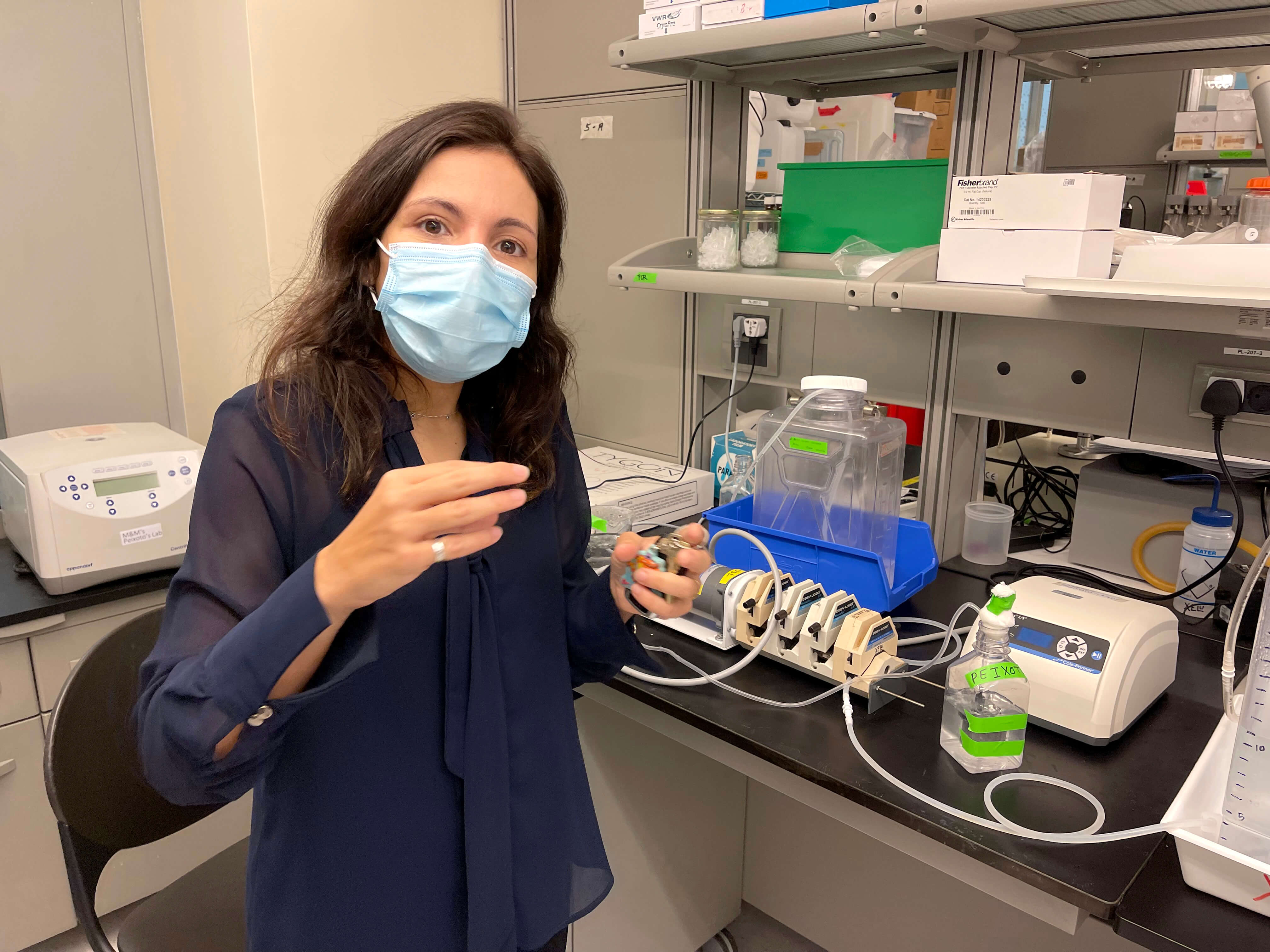 Peixoto believes that the probiotics buy corals time to recover so that the algae will stay for a longer period of time or more quickly return after a bleaching event. She first conceived the idea of using probiotics to protect corals based on research results from a previous project in Brazil, led by another KAUST faculty, Dr. Alexandre Rosado, that involved helping mangrove ecosystems recover from oil spills. For that, she developed probiotic pills from plant bacteria that degraded oil, and that plant roots could absorb through the sediment. To her surprise, the formula not only broke down the oil, but made the plants grow stronger and faster.

"I knew that the pills we selected could degrade the oil, but was astonished by the extent to which they also promoted hormone growth and immune responses in the plants," she said. "Based on the plants' recovery, I wondered if probiotics could do the same for corals. At the time, there wasn't any literature about how to manipulate beneficial coral bacteria, which are different from that of plants. There was no recipe for me to follow. When I couldn't find it in the literature, I decided to create it." 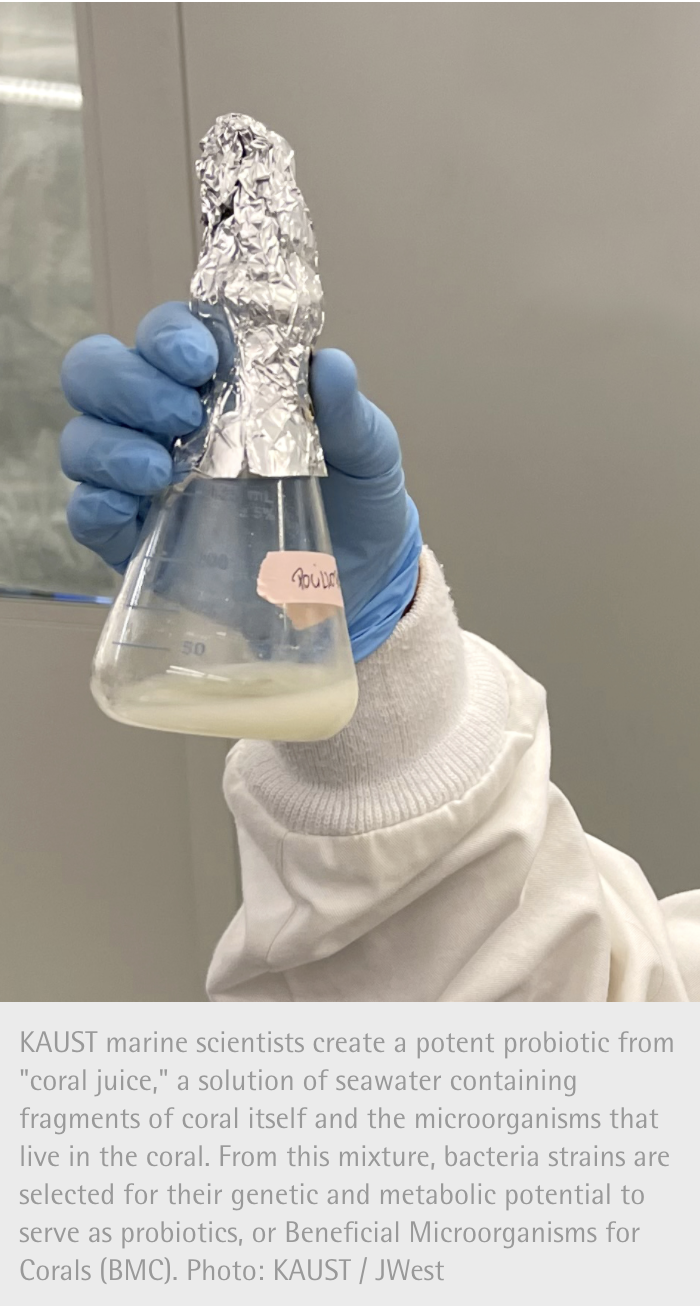 The study centered on Mussismilia hispida, a coral species endemic to Brazil.

It demonstrated that corals change their bacterial association when exposed to different environmental conditions. Based on their findings, the researchers created a potent probiotic using the coral itself and its associated microbes. To this end, they ground and soaked fragments of the coral in a solution of seawater, a process that released the bacteria that live in the tissue, skeleton and other coral compartments. From this "coral juice," they isolated, plated, and studied hundreds of bacteria strains for their genetic and metabolic potential to serve as BMCs.

The team then selected six or so of these strains for traits deemed likeliest to activate the corals' natural immune responses. For example, some bacteria are natural antagonists to pathogens; others, able to scavenge and degrade ROS, recycle nitrogen, or generate nutrients for corals. Such traits are advantageous in a BMC formula. The best bacteria strains comprise the probiotic formula, as do fungi and yeast, also part of the coral's microbiome. Peixoto said that a holistic formula equips the corals with hearty traits for buffering and surviving heat trauma.

Working with two groups of corals in controlled aquarium environments — those inoculated with probiotics and those with a placebo — the scientists exposed the corals to the same degree of thermal stress. Whereas all corals initially bleached and showed signs of inflammation, those with BMCs survived and recovered; those without, died.

Peixoto commented, "There was a significant difference in the expression of specific genetic traits when we compared the two groups. We could see from the physiological response that all corals suffered some degree of thermal stress, but those inoculated with BMCs recovered and returned to their original state, with results similar to corals that had not been exposed at all. Corals that did not receive BMCs sustained strong damage or ultimately died. These results indicate that coral probiotics increase coral recovery and their likelihood of surviving heat stress."

By mapping and comparing changes between the two coral groups, the researchers could also see changes at the cellular level, such as how the lipids, membranes and other coral structures responded. In this way, Peixoto said that the metabolite results aligned with the physiological data. Probiotics increased the overall stability and survivorship in the symbiotic algae-coral host relationship by more than 40%.

It is this alignment of data across scales that former KAUST faculty member Dr. Christian Voolstra said makes the study foundational. Voolstra brings expertise in reef genomics and big data analysis. A close collaborator with Peixoto since 2016, he developed the analytical frameworks for the study and helped interpret the data.

"The study is remarkable for demonstrating what we call genetic reprogramming. By this I don't mean that we are editing the genes, quite the opposite," he said. "Rather, we are borrowing beneficial microbes that evolved in harmony with the reef, and are offering them to the corals. The selected microbes aren't superimposing their functions onto the host; they're prompting the coral to make beneficial changes at the genetic level. This is a key understanding about the mechanisms underlying coral probiotics that was not known before."

Now at KAUST, and encouraged by the data from the Brazil study, Peixoto and team have extended the experiment to include Pocillopora verrucosa, a species of stony coral common to the Red Sea and reefs in other parts of the world. They chose Pocillopora for a number of reasons: its genomic sequence is already known; they previously worked on this species in tank experiments; it grows fast and is abundant in the Red Sea; and literature is widely available. In this regard, Pocillopora is a model organism to study. The process of creating probiotics for Red Sea Pocillopora is the same as that used for M. hispida, only they are from Pocillopora microorganisms and material isolated from the Red Sea. 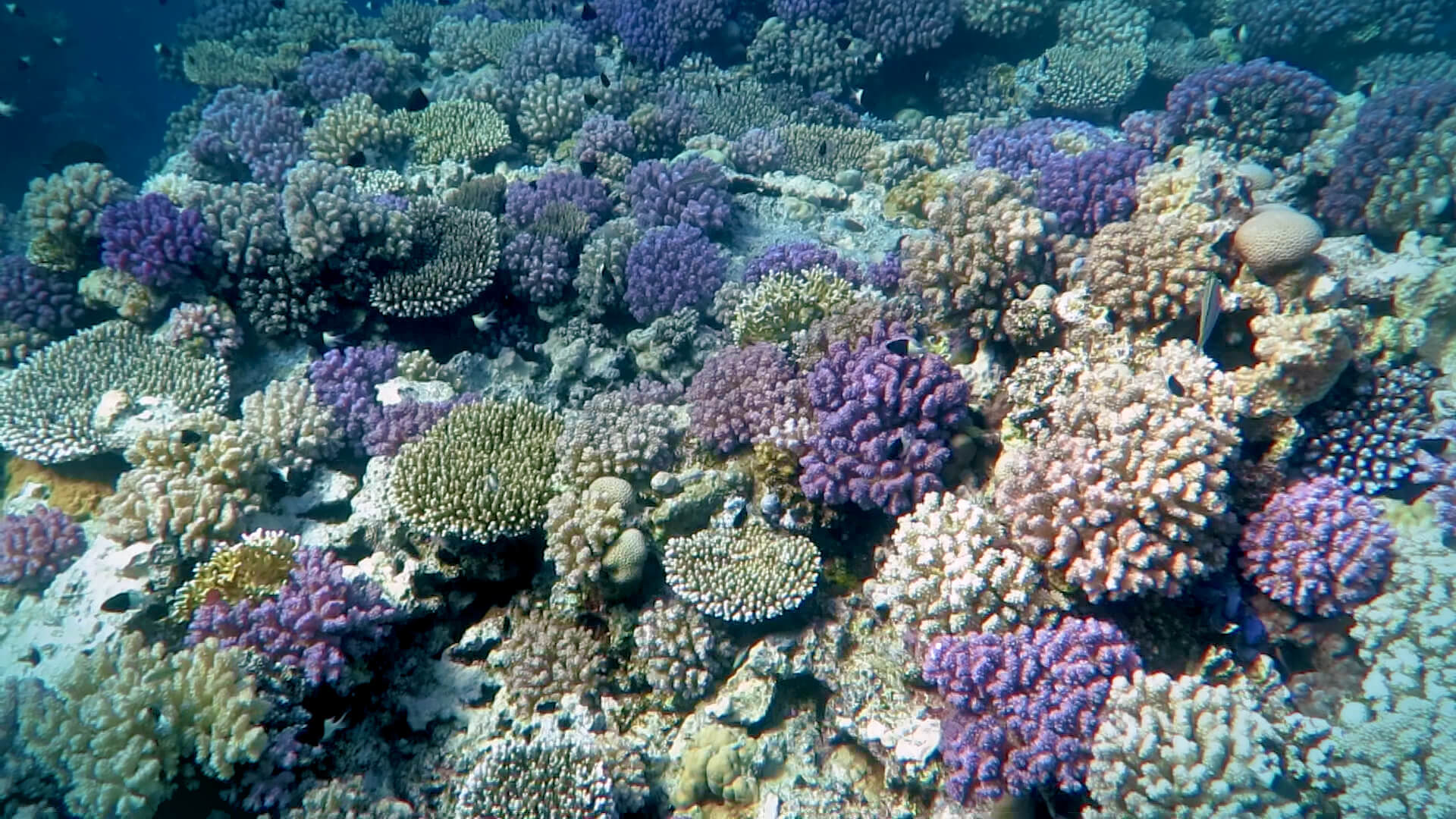 KAUST marine scientists study the effects of probiotics on Pocillopora verrucosa, a species of stony coral common to the Red Sea. Photo: KAUST

The experimental phase at KAUST is completed, and the scientists are preparing to test the probiotics on living corals in the Red Sea using controlled pilot approaches. This will be the first time an experiment of this nature has been conducted in the natural laboratory of the sea.

Microbiologist and Postdoctoral Fellow Erika Santoro brings expertise in host-microbiome interactions. Her involvement centered on analyzing and selecting strains for use in the probiotic, and subsequently assessing coral behavior.

"Working with biological systems is challenging and sometimes brings unexpected results; things go wrong, but things go right," she said. "When you see from the experiments that our hard work actually helped the corals to survive, it is the best feeling and worth all the long hours. That's why I'm in science."

Taking the work to the sea

Peixoto selected a marine site near KAUST where Pocillopora is the dominant coral species, and with qualities suitable for replicating in the controls — small patches of corals, or mini reefs, to better control the inoculation and monitor it over time. Bacterial probiotics will be inoculated in the form of pills, or beads, with the healthy bacteria, immobilized within. The scientists will distribute the beads to the designated corals. They will slowly dissolve in the salty sea, releasing the microorganisms in a cloud of probiotics that the corals will then absorb. Treatment is slated for late August 2021. 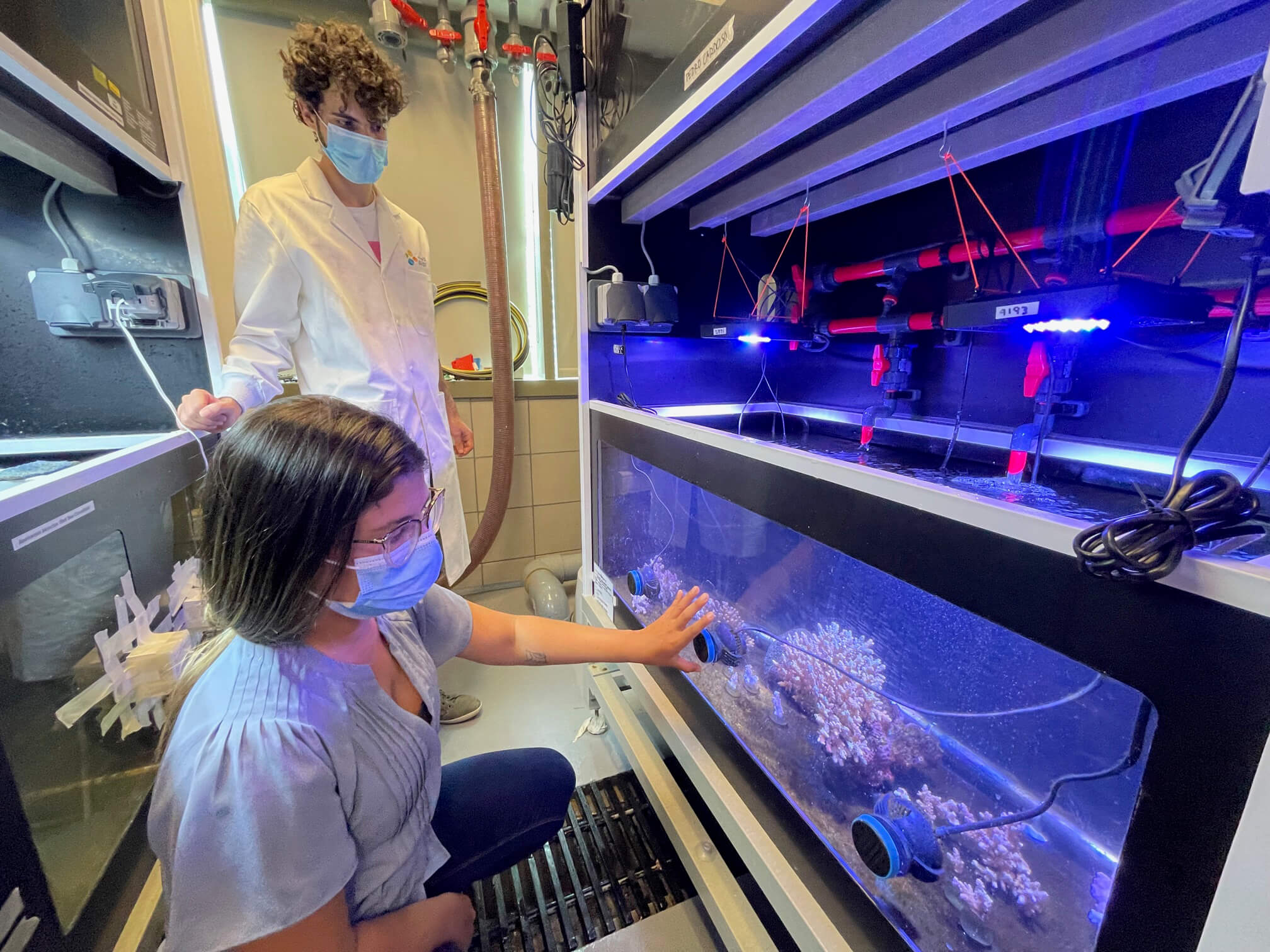 "Taking our research to the sea is a huge step for us, and we are prepared. The experimental site is well documented, well controlled, and all corals have been tagged."

Villela said that both their treatment and post-treatment measurement approaches are unique because they factor more than the health of the coral; they consider the total holobiont — the microorganisms in association with the coral, i.e., the algae, fungi, bacteria and other microbes that live there. "A healthy microbiome indicates a healthy holobiont, which will likely reflect in a healthy reef," she said.

How often the corals will need to be inoculated after the initial exposure is an unknown at this time. Peixoto said they are investigating whether the inoculations can promote epigenetic change or some kind of adaptation that could be permanent and passed on to the next generation.

She hopes to expand the project on a larger scale to reefs within the Red Sea and also those in other parts of the world, should the pilot approaches prove to be safe and efficient. Whether or not bacteria from a coral species in the Red Sea environment will work on the same coral in a different environment is a question that she and the team hope to answer. She said it's an undeveloped area of exploration, but that it is possible.

"We have the goal to select probiotics that can be used in different places with different species, but we need to start slowly by first understanding the effects of the probiotics on the local reef and its microbiome," she said. "It's part of our framework of sustainable and smart development of techniques to move safely and responsibly. If it works, then we go from here. I truly think microbes rule the world because they provide the cycle of nutrients that all life forms depend on for survival."