The Tale of Bev Bradley's Bream and the VPR's Fish Supper 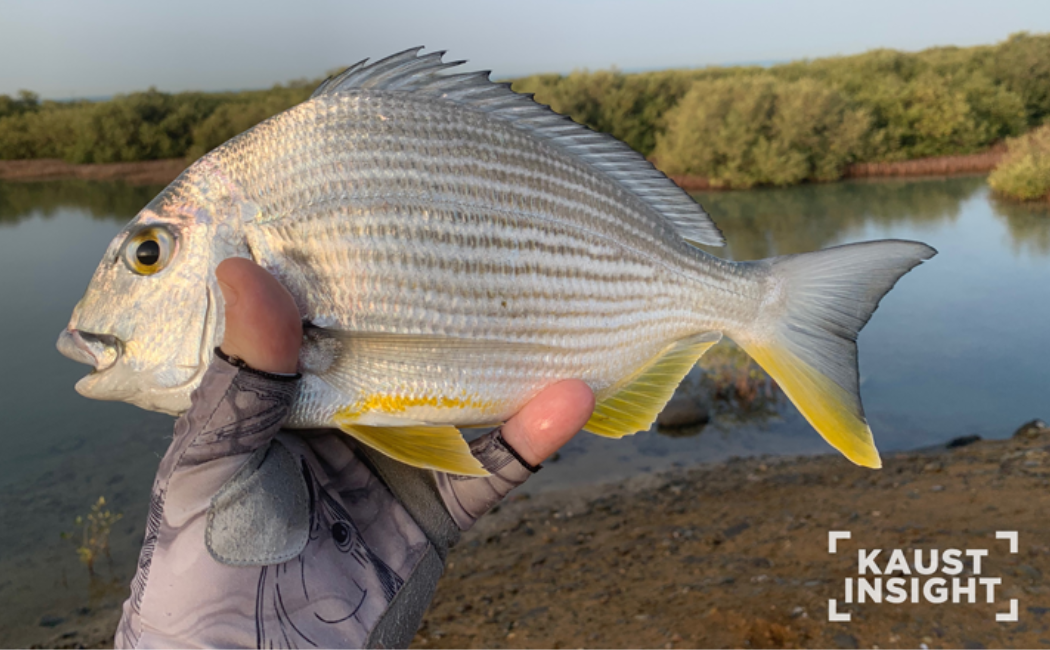 The Tale of Bev Bradley's Bream and the VPR's Fish Supper

A tight line and a keen eye led KAUST’s Vice President for Research to spot a new species of bream now named in honor of two beloved women.

“I had been catching both Acanthopagrus species (mostly A. berda) for a while by bait fishing with shrimp and sometimes squid or bread,” explains Bradley. “I noticed that some of the fish I caught, although superficially similar to A. berda, had some distinctly unique features.”

The “new fish” had a more shallowly sloping forehead, a distinct black patch on the rearward edge of the gill cover, a more yellowish pectoral fin and a paler body color. Bradley was not able to find it in any fish-guide books or websites.

In February 2021, Bradley asked marine scientist Mike Berumen if this could be a new species, providing him with a fin clipping from the “new fish” and, for comparison, a clipping from a standard A. berda caught at the same time.

Berumen’s team undertook a genetic analysis, sparking a more detailed study, with results that were sufficiently interesting to prompt an email thread among Berumen’s team with the subject line: “I hope the VP hasn’t eaten that fish.”

“I hope the VP hasn’t eaten that fish.”

Bradley redoubled his fishing efforts hoping to catch some specimens of what was now considered a new species.

“Catching more samples proved difficult for a while, prompting my younger daughter to suggest to my wife that I had probably found an unrecognized species and also made it extinct,” says Bradley.

Also enlisted in the quest to find the fish was Ph.D. student Collin Williams, the then vice president of the KAUST Fishing Club. Eventually, Bradley caught one, and Williams, with others from the Red Sea Research Center (RSRC), used a tidal trap on the KAUST North Beach to catch more.

A detailed study of these specimens included direct comparison of their physical morphology and genetics with other sea bream from the region — (A. berda, A. bifasciatus and R. haffara), from the Arabian Gulf (A. arabicus, A. sheim, and A. catenula) — and with records online. 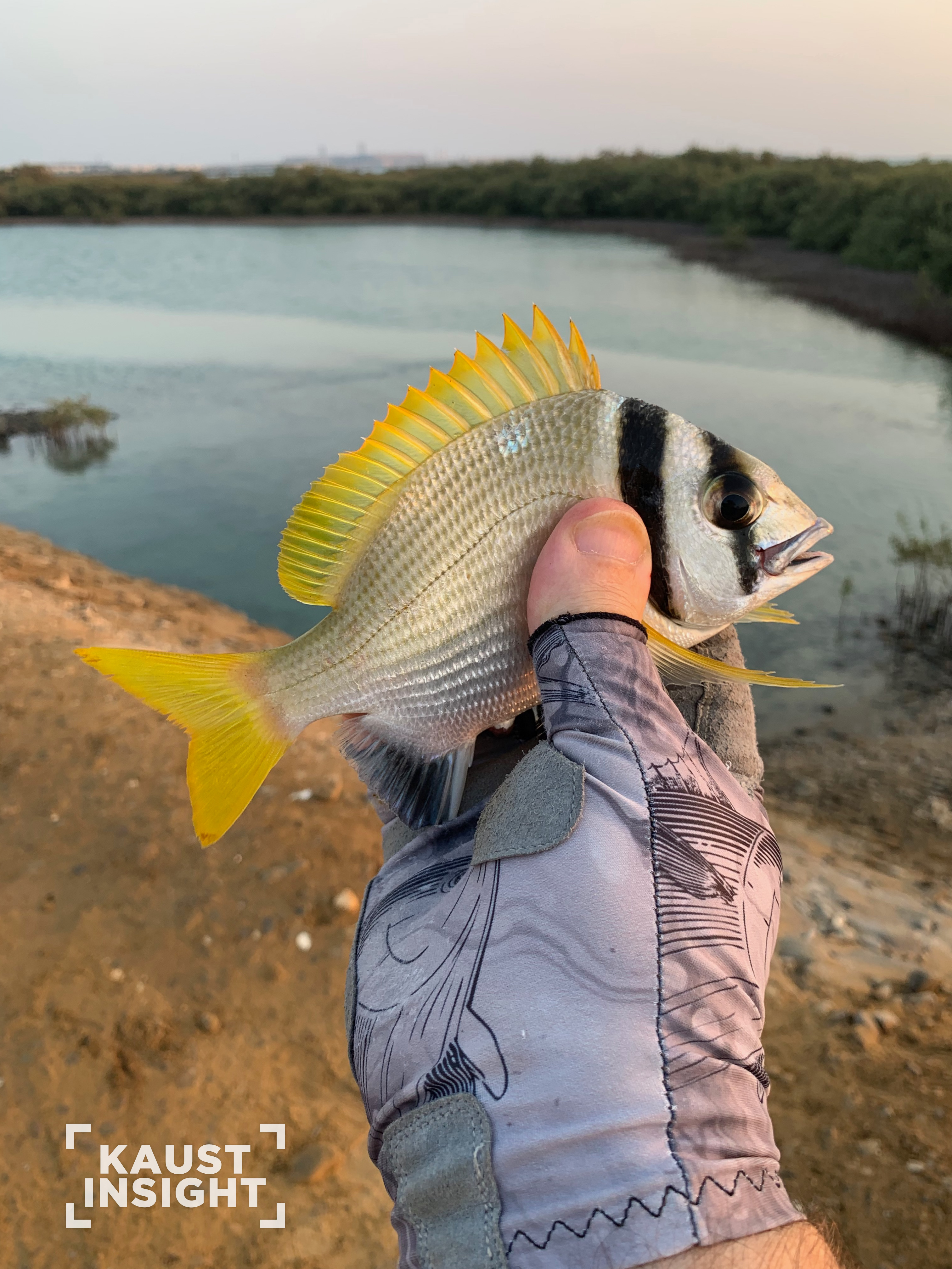 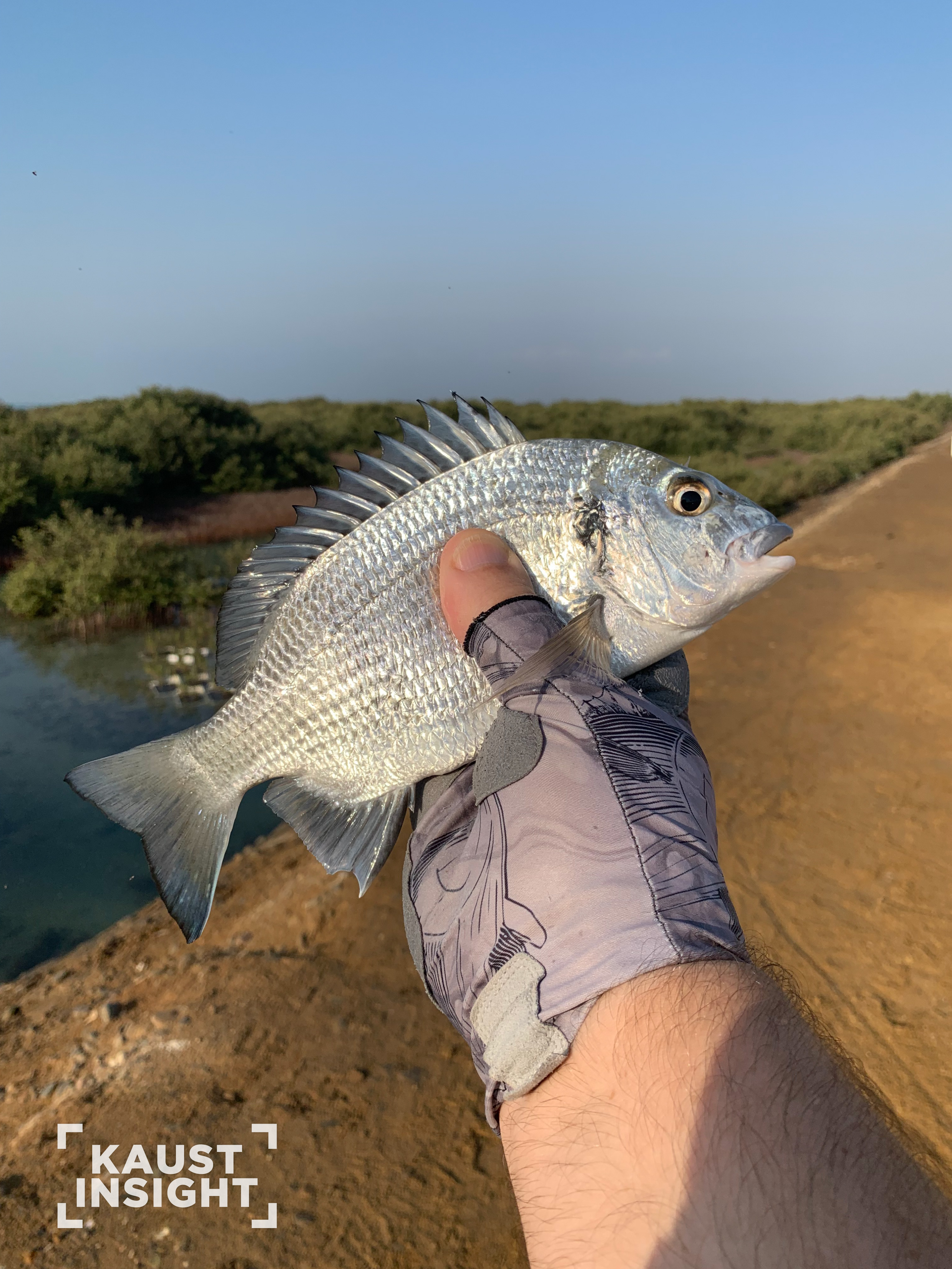 Finally, the “new fish” was determined to be a distinct species with its closest relative, the Wandering Sea Bream (A. vagus), inhabiting long stretches of the Indian Ocean coast of South Africa and Mozambique.

“I never imagined I would discover a new species of fish when I decided to take up fishing again at KAUST, after a long period of fishing inaction in the UK, and I am sure that I have very slim chances of doing so again.”

“the ‘new fish’ was determined to be a distinct species with its closest relative, the Wandering Sea Bream (A. vagus)”

One of the surprises, suggests Bradley, is that a relatively large fish (up to ~ 30 cm in length) had eluded identification until now, despite the earliest studies on sea bream in the region beginning almost 250 years ago. Nor had it been reported at local fish markets, suggesting that it is not a staple of commercial fishing.

One conjecture from the RSRC team is that this fish favors shallow water in and around mangrove stands, which is not a regular target for fisheries activity or scientific diving.

The other message to take from this discovery, suggests Bradley, is that there is so much yet to be explored in the Red Sea!

“The ongoing challenge to catch more of the species that live along the shores of the Red Sea and to learn a lot more about these fish and their habitats through piscatorial ichthyology endeavors will definitely keep KAUST anglers busy for many weekends to come,” he says.