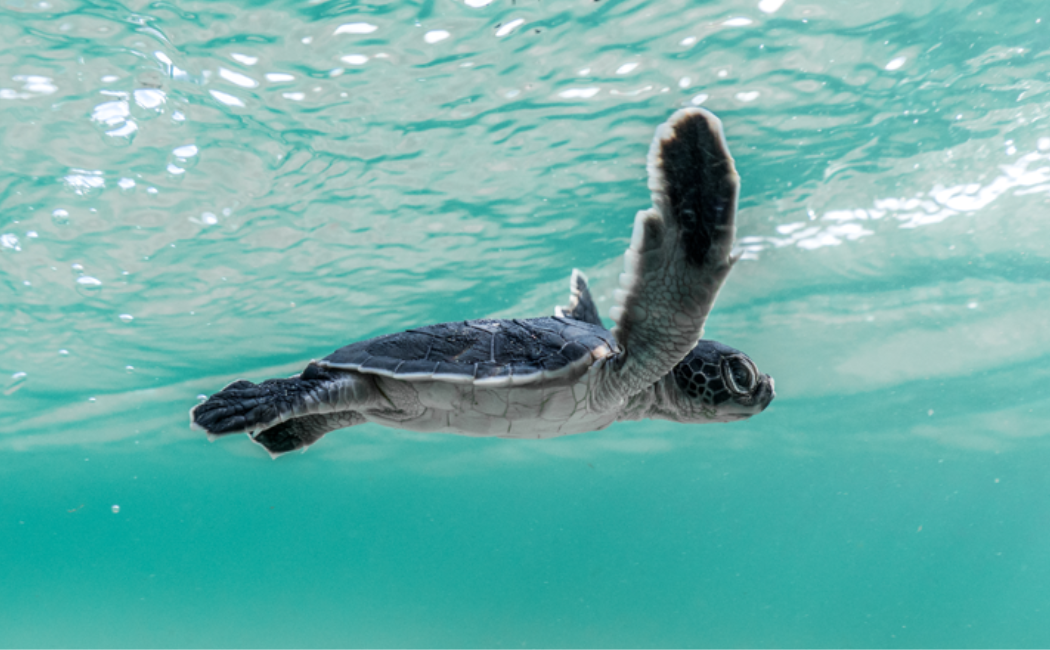 An environmental foundation and a cement factory are supporting ongoing efforts and research to help safeguard the future of Red Sea turtles.

One of the largest sea turtle nesting grounds on the Red Sea could become a conservation area due to an unusual alliance. A cement company that once undermined the survival of green turtles on Saudi Arabia’s Ras Baridi beach is now supporting KAUST’s research efforts to protect this endangered species.

Every year, more than 300 green turtles (Chelonia mydas) come to lay eggs at Ras Baridi, just north of Yanbu in Saudi Arabia. In 1999, wildlife researcher Nicolas Pilcher reported a study on the impacts of a local cement factory on these nests. Cement dust settling on the beach was mixing with seawater to form a solid crust that prevented turtle hatchlings from digging themselves out of the nest to the surface.

After learning this, the Yanbu Cement Company drastically cut its dust emissions and is now a key stakeholder in conservation efforts led by The Ba’a Foundation, a not-for-profit entity with a focus on ecological and cultural initiatives, and funded by Extreme E, the Ruia Family and Stamina Productions.

Sea turtles are vulnerable from the moment they are laid in a nest dug by their mothers. Even before they hatch, the eggs can be crushed by careless drivers on the beach, drowned by rising tides or dug up and eaten by dogs and foxes. 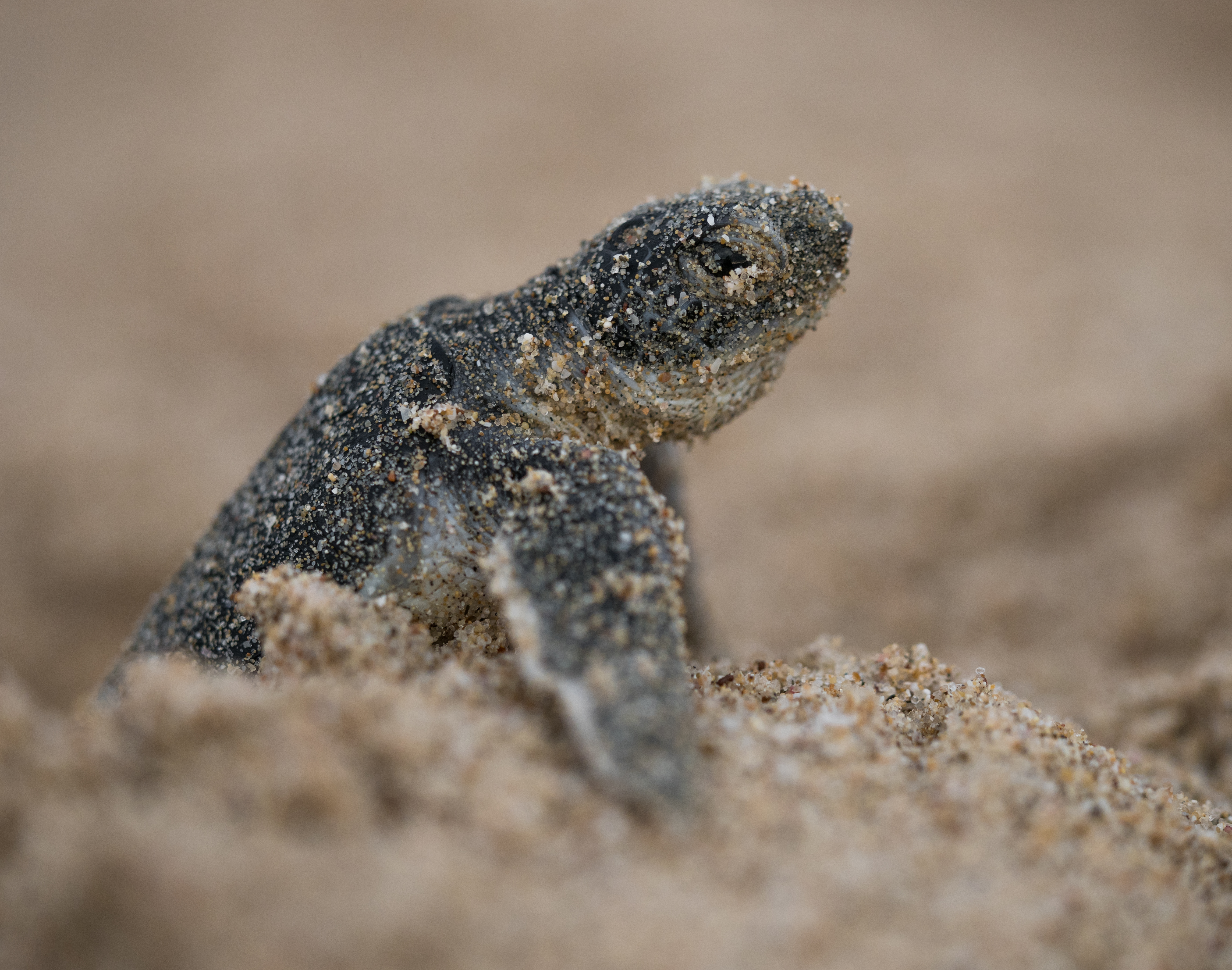 Turtles have a precarious early life and this research hopes to give them more of a fighting chance to survive those early weeks. ©KAUST2022; Morgan Bennett Smith

Another looming threat to the future of sea turtles is climate change. Adult turtles are well adapted to warm waters, but their eggs are highly heat sensitive. The temperature in the nest determines the sex of the hatchlings, with a sweet spot of around 29.2 degrees Celsius producing an equal ratio of males to females. If temperatures go higher, hatchlings will be mostly female. If temperatures rise further to around 33-35 degrees Celsius, all eggs perish.

“Adult turtles are well adapted to warm waters but their eggs are highly heat sensitive.”

“Mean temperatures in Saudi Arabia are about 30 degrees Celsius during the nesting season and Ras Baridi is a dark sand beach, which retains more heat,” says Kirsty Scott, Ph.D. student under the supervision of KAUST faculty member and marine scientist Michael Berumen. “Previous studies have found nest temperatures up to 34 degrees Celsius, so we’d expect to find a larger proportion of females here.”

Despite this, turtle numbers in the area suggest that the population is healthy. “These local populations seem to have adapted to the conditions here, and we are currently investigating that,” says Hector Barrios-Garrido, a sea turtle expert at KAUST and project manager of the Ras Baridi conservation program. “But we don’t know what will happen with global warming. The Red Sea is already much hotter than other oceans, so we can use it as a living laboratory to study what might happen in other parts of the world as it warms,” he adds.

Scott’s team will head to Ras Baridi in August, where their work will start once the mothers begin emerging from the sea to dig their nests. Once each mother has buried her eggs and returned to sea, Scott will insert a probe into the nest to record its temperature throughout the incubation period — about 50 to 60 days. The team will assess whether a simple adaptation, such as shading techniques, could cool nests enough to rebalance turtle sex ratios as global temperatures rise. They will cover half of the nests with either palm leaves or white sand, which they will remove shortly before the eggs hatch.

“The team will assess whether a simple adaptation, such as shading techniques, could cool nests enough to rebalance turtle sex ratios as global temperatures rise.”

Male and female turtle hatchlings look the same and so determining their sex typically requires invasive methods. However, recent research has succeeded by using hormonal markers in the blood. When the hatchlings emerge in October, Scott’s team will scoop up 10 turtles from each of the 40 nests to extract minuscule blood samples for screening. “It’s a relatively inexpensive and simple method, although taking blood from 400 turtles could take a while,” says Scott, “most importantly it doesn’t harm the hatchlings.”

This data will be used to model changes in turtle sex ratios at Ras Baridi with global warming and will show how conservation efforts can help protect global turtle populations. “Turtles in the Red Sea face a variety of pressures, ranging from coastal developments to climate change,” says Berumen. “It is encouraging to see Saudi Arabia recognizing the value of these animals and key stakeholders making strong commitments toward protecting these species.”

“This data will show how conservation efforts can help protect global turtle populations.”

The cement factory is also helping out with logistics. For previous projects, Scott explains that she had to travel for several hours at night to visit remote nesting sites. “Sometimes we’d finish at 4 am, and you really don’t want to drive at this time,” she says. “At Ras Baridi, we’ll stay onsite in a house provided by the cement factory, using a spare room as our lab and will have a permit to drive through the factory grounds.” 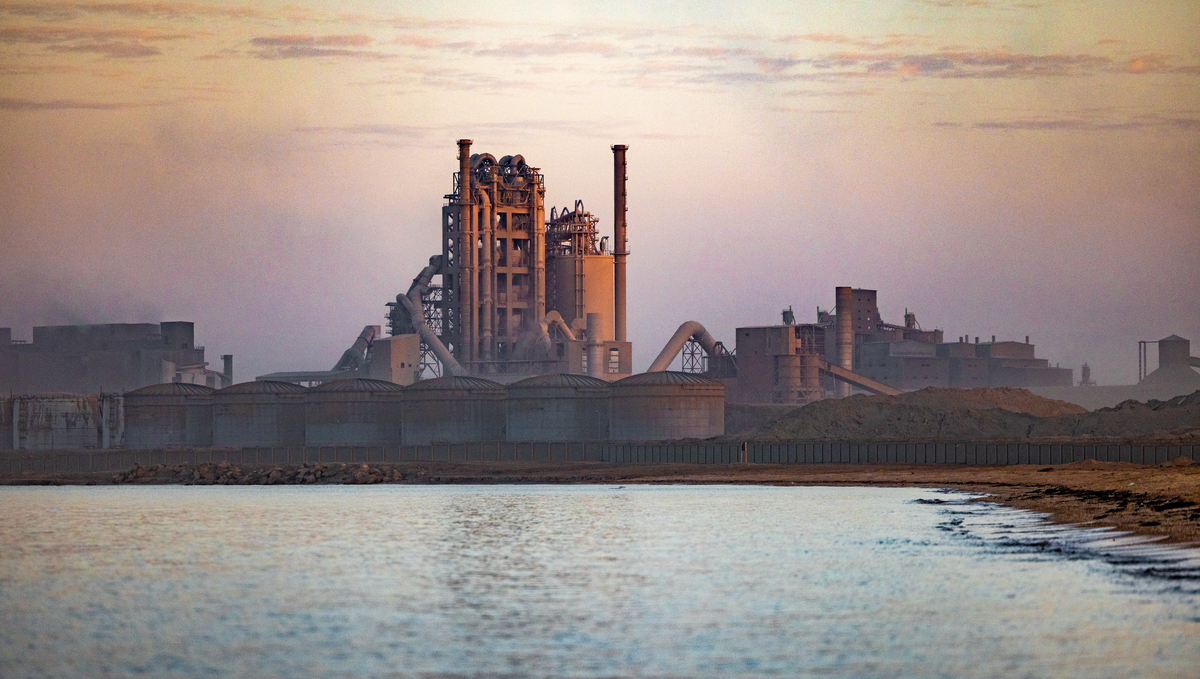 The Yanbu Cement Company is supporting the conservation of Red Sea turtles by changing its production process that affects hatchlings’ ability to dig out of their nests. ©KAUST2022; Morgan Bennett Smith

“The KAUST-led team is implementing a five-year project, supported by Ba’a foundation and its key partners, to establish a marine turtle conservation area in Ras Baridi. This initiative entails monitoring the turtle nesting activity and stress factors, as well as developing an environmental awareness and educational program to raise awareness for marine turtle conservation, especially the uniqueness and conservation value of the Ras Baridi breeding grounds,” says Ricardo O. Ramalho, project director. “I want to ensure that my daughter and future generations can see turtles too,” says Barrios-Garrido.