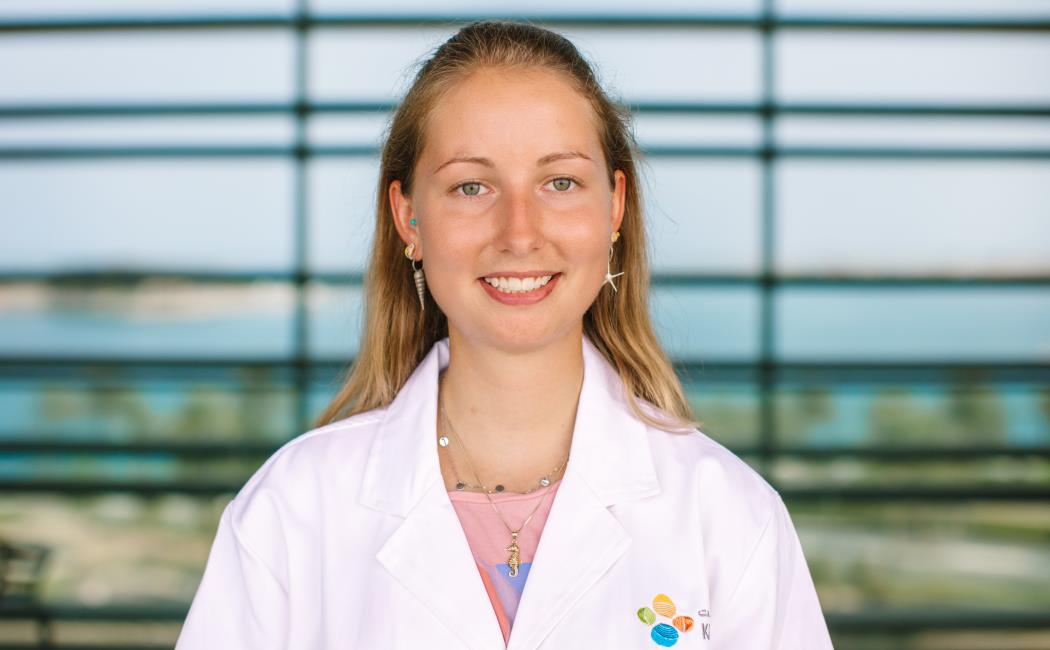 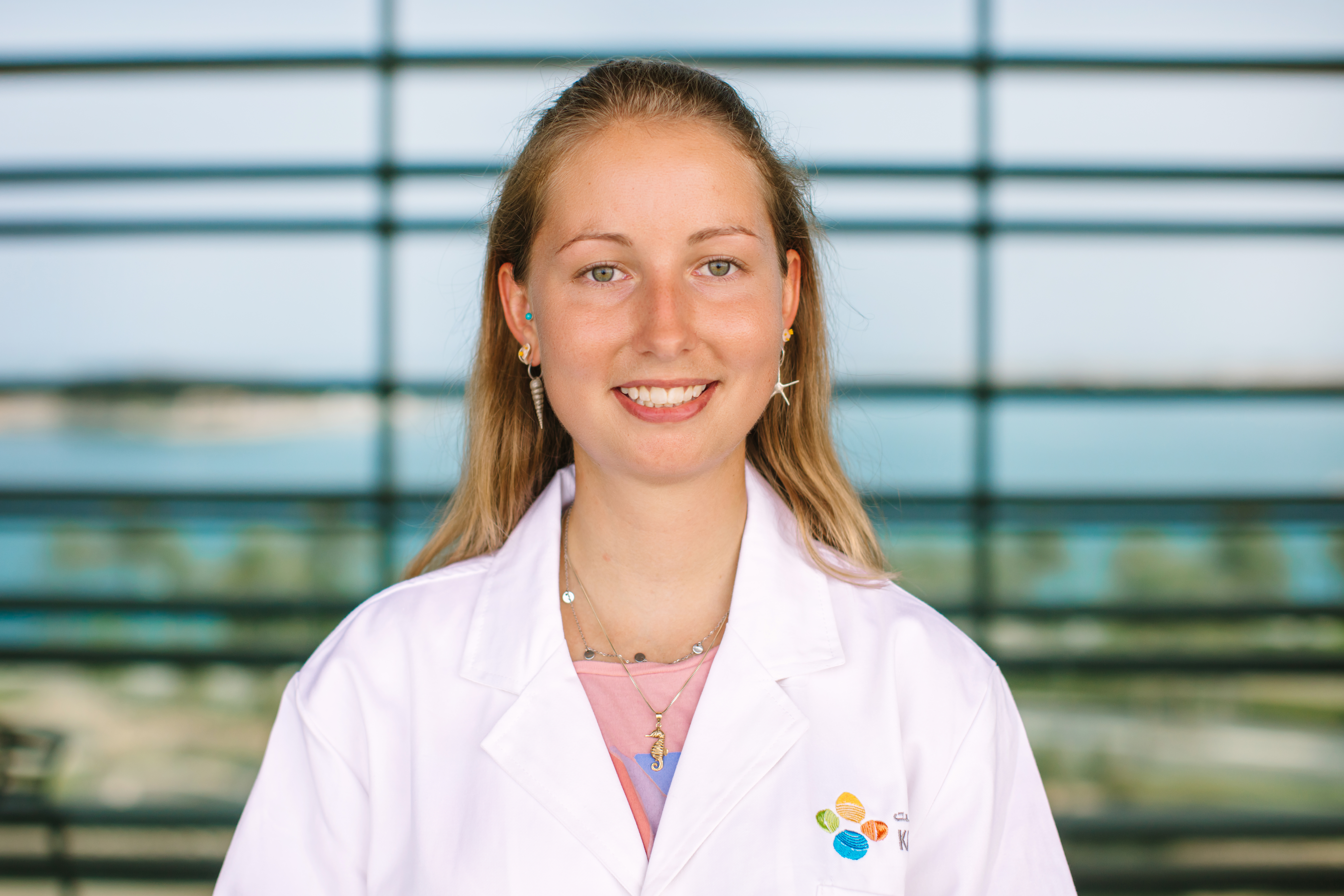 Susanne Bähr, a PhD Student in the Habitat and Benthic Biodiversity Lab at KAUST's Red Sea Research Center, has a deep fascination with symbiotic coral-dwelling crustaceans. She is currently exploring fluorescence in decapods— a poorly understood phenomenon in marine invertebrates, which could potentially play an important role for the fluorescent organism itself or even for other inhabitants of coral reefs.

Susanne Bähr was drawn to the ocean at an early age after having learned to snorkel before she could even swim properly. This opened her eyes to the wonders that lay beneath the ocean surface and sparked her passion for the marine environment. Susanne completed her undergraduate studies in Biological Science at the Martin-Luther University Halle-Wittenberg, Germany, followed by a MSc in Marine Biology at the University of Groningen, The Netherlands, where she met her former PI who got her interested in symbiotic relationships between marine organisms and corals.

"I've always been interested in symbiosis," says Susanne. "I just find it completely fascinating how two different organisms, sometimes belonging to separate taxa can come together and form a close relationship where at least one of the two is more or less completely dependent on the partner. These relationships can be beneficial for both, negative for one and positive for the other, or positive for one and without any consequences for the other. There are just so many aspects of this topic that are so interesting," she says.

For her master’s thesis, Susanne's research focused on the symbiotic relationships between a species of coral-dwelling gall crabs and stony corals of the family Pocilloporidae. While conducting her MSc research, Susanne also spent time as a MSc. Research Intern at the REEFolution Foundation Kenya (a coral reef restoration foundation) in cooperation with Kenyatta University, Kenya, where she studied the behavioral aspects of the symbiotic relationships between coral guardian crabs and stony corals, examining whether they play a role in defending corals from predatory crown of thorn starfish.

Susanne's enthusiasm for crustaceans is infectious. "Crustaceans are often overlooked yet they are so diverse," says Susanne. "Take any reef ID book and just look at the amount of different crabs and shrimps that live on feather stars, sea cucumbers, all different kinds of organisms. There are hundreds of them and they look exactly like their host. This has always been something that makes me think: Wow! How is this even possible from an evolutionary point of view?

"The biodiversity of crustaceans that live in association with reef organisms is probably greater than any other taxa. There are just so many symbiotic decapods out there, it's incredible," says Susanne enthusiastically. "From one side, it’s very important to study this biodiversity to get an idea of how many species live on the reef. But more importantly, since these associations are beneficial for at least one of the partners, when we are looking at so many coral species facing threats such as climate change, rising sea surface temperature, and human disturbance, it's important to understand the relationships that are out there, because if one partner in the relationship is wiped out, the other is also effected," she explains. "These reef dwelling crustaceans are particularly vulnerable to any disturbance as the whole ecosystem is impacted by it. In many cases, we don't even fully know what the benefits of these symbiotic relationships are for each partner, so it's important that we learn more so that we can assess the impact of disturbance on either party in the symbiosis in order to better understand the implications this would have on the other partner."

It was during a night dive that Susanne first observed red fluorescence in the gall crab species she was studying. This sparked her interest in fluorescence in marine invertebrates, a poorly understood phenomenon.  "Fluorescence is a physical and chemical phenomenon where light gets absorbed and re-emitted. Most of us might have experienced this at a party where UV lights make white garments glow super brightly in the dark," Susanne explains. "In the marine environment where there is not much light, fluorescence can be important for organisms viewing it as it adds light, like having a flashlight underwater. So this mechanism could be interesting from an ecological point of view for the animals that view the organisms emitting the light, but it could also be that the fluorescent pigments are helping to catch some of the UV radiation that is entering the water," says Susanne. "Or it could simply be an evolutionary artifact that occurred by chance. So, there are many questions that need to be answered."

For her PhD study, Susanne would like to find out which crustaceans are fluorescent in the Red Sea — so far, there is one main family that she is targeting that she has found to be fluorescent. She also wants to know what fluorescent pigment or compound is in these crabs; whether it can be used for monitoring later on in the field; and whether the fluorescence has any ecological relevance for the respective organisms.

"A lot of research has been done on fluorescence in reef fish, and I am trying to use similar methods and ideas and see if they apply to crustaceans as well," says Susanne, "but in terms of crustaceans there is not much research that has been done."

To explore fluorescence underwater in the field, Susanne initially went night diving with torches that emit a blue light — the optimal excitation for the fluorophore fluorescent pigment that she's looking for. She donned a yellow barrier shield over her dive mask to filter out everything except the fluorescence. "You enter a very surreal neon green, red and yellow world if you go diving at night, and this helps you spot the organisms," Susanne explains. To study the fluorescent crabs in more detail, she replicates this setup back at the lab using a stereo microscope, where she tries to excite the fluorescence and filter only the fluorescent light that comes back, taking pictures and analyzing how much of their body is fluorescent, for example. "I have been using a confocal microscope to examine the emission and excitation spectra further to actually to get values to determine at which wavelength they are emitting the light back," says Susanne. "I am also working a lot on the molecular side in terms of phylogeny. I am using different genetic markers to construct a phylogenetic tree to examine the evolutionary pattern of the fluorescence, in gall crabs in this case."

Susanne is excited about the potential contribution her work could offer, not only in terms of understanding the ecological role and/or evolutionary pattern associated with fluorescence to satisfy the curious scientist within, but also the potential contribution these fluorescent pigments may have for applied science. An important aspect of her research is to find out what kind of fluorophore is present. What kind of pigment is it?  Is it a carotenoid, a different pigment, or is it a protein? "For example, GFP (green fluorescent protein) got discovered from a jellyfish and is now widely used as a marker in biotechnology to visualize molecular processes on a cellular level with the aid of fluorescence," Susanne explains. "Science is constantly looking for fluorophores that can be used in molecular biology. So, it would be very interesting to see whether this pigment can be used in applied science." They could also be useful for helping to find the organisms in the field, she adds.

When asked about her future plans, Susanne says: "I've been here for over a year now - which I can't even believe; it feels like yesterday that I arrived. I would like to strengthen the collaborations I was able to establish within and beyond the Red Sea Research Center. My project is touching various fields at once and I can't become an expert in all of them, so working closely with collaborators is crucial to realize all my ideas. Because I'm the only person in my lab that works on fluorescence, I need to find people that have expert knowledge in specialized fields such as physics, advanced molecular biological topics or chemistry for example. I am very curiosity driven but at some point, you need other people to guide you."