Art at the cutting edge of coral reef research 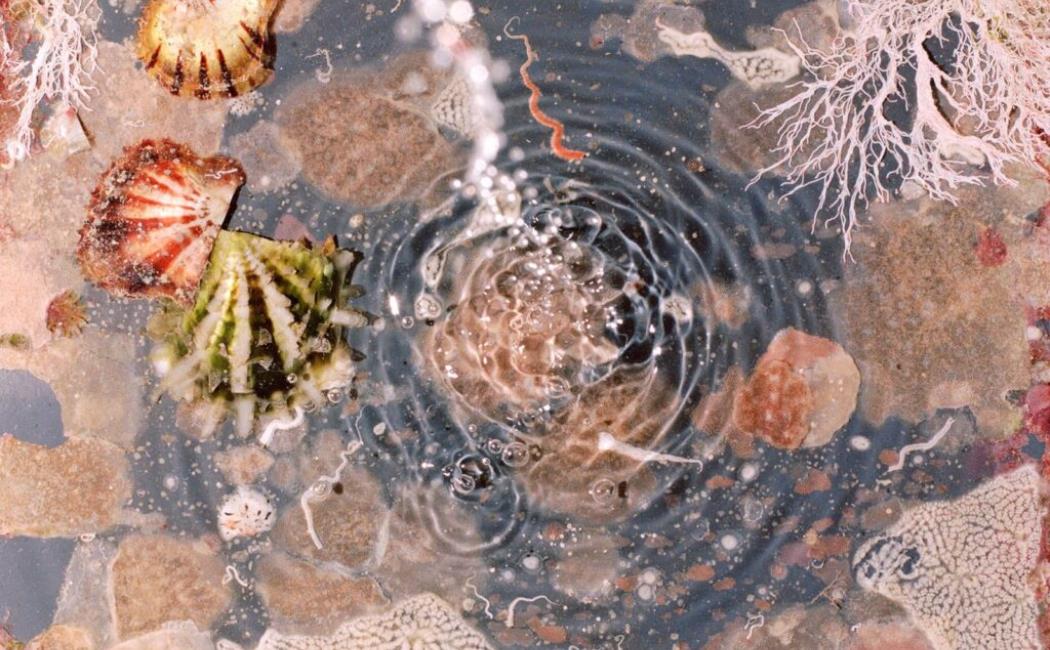 Art at the cutting edge of coral reef research

From lens to lab, artists and scientists have been capturing the critters hidden in coral reefs. 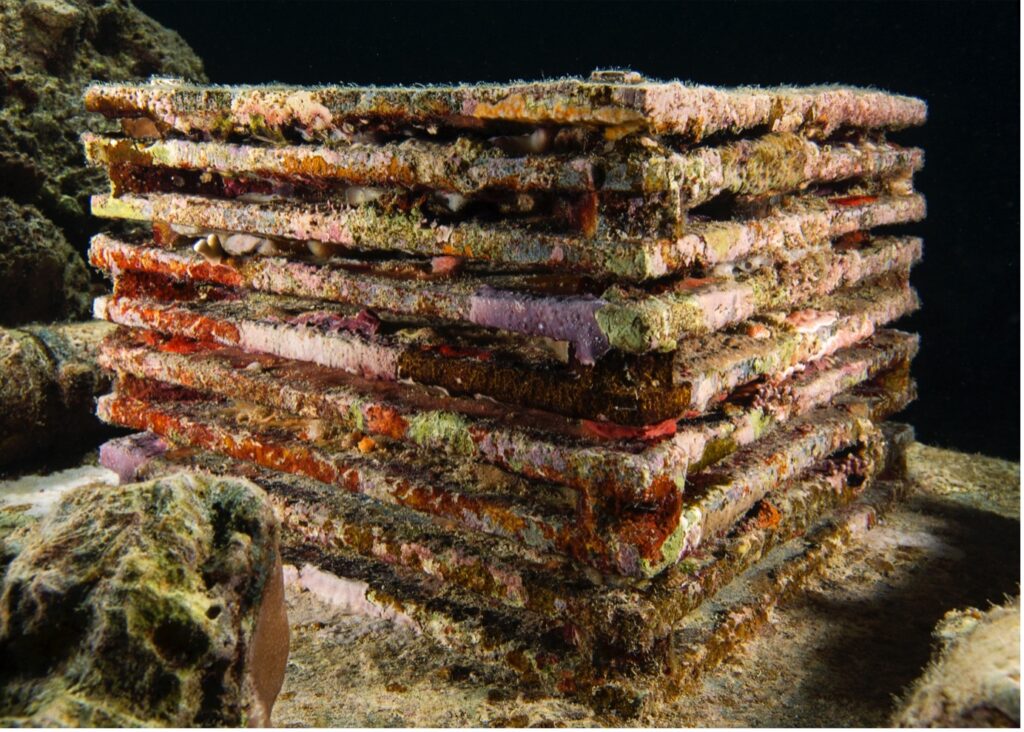 The pair met graduate student João Rosado while participating in a residency through the Artists in Labs program. The Zurich-based program, which KAUST joined in 2016, enables artists to get close to scientific research and get creative at the cutting edge. It also exposes scientists to diverse perspectives that can help them to see their work in a new light.

ARMS are stacks of tiles designed to mimic the complex structure of coral reefs. Each stack consists of nine plates separated by a gap containing intertwined plastic shapes to create areas of higher flow and lower flow, like within a reef. Placed on the seabed, they are left to be colonized by marine species, then collected and taken apart in the lab to see what has moved in. 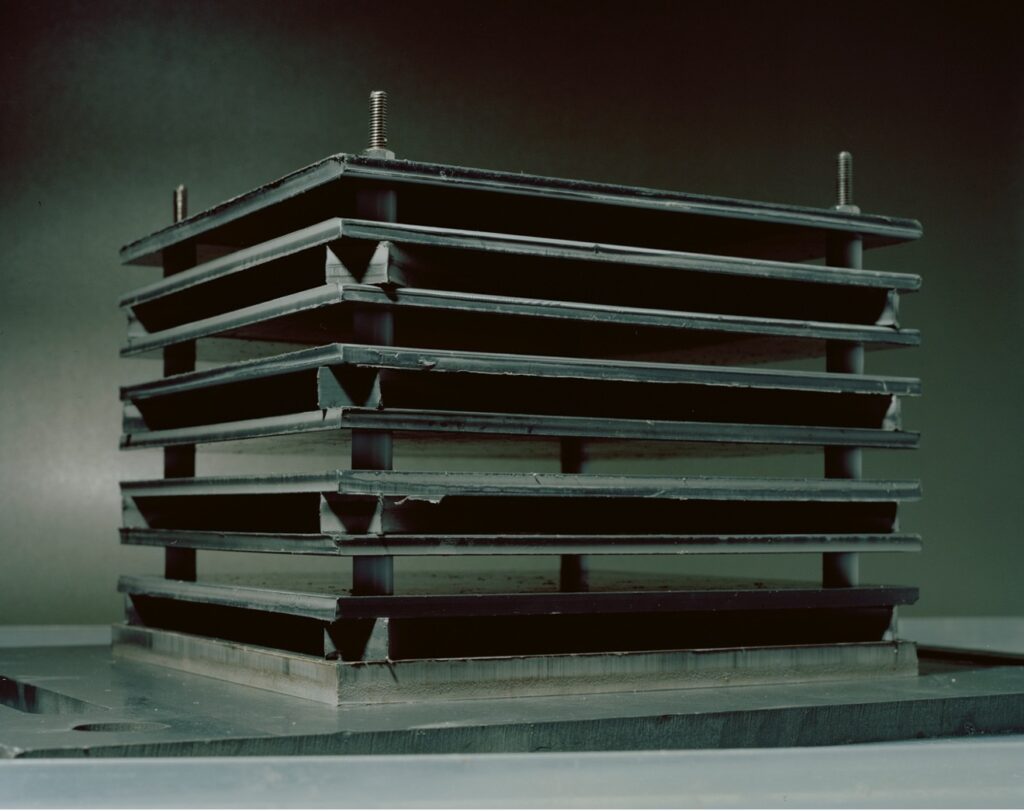 First developed for the National Oceanic and Atmospheric Administration’s Census of Marine Life (2010 – 2020), ARMS are widely used to collect fauna on and near the ocean floor. Marine scientist Susana Carvalho leads the ARMS project at KAUST with more than 180 units already deployed and retrieved since 2013. ©2022; Taiyo Onorato and Nico Krebs

“We were absolutely stunned by the concept of these units,” says Krebs, “and fascinated by the visual manifestation of an extremely diverse range of creatures colonizing the same structure.” During their stay, Krebs and Onorato learned to scuba dive and, guided by KAUST’s underwater photography specialist Morgan Bennett-Smith and reef ecologist Song He, built up a huge collection of images and videos of ARMS in the sea and in the lab.

But for Rosado, who is studying reef biodiversity on a near-shore reef, ARMS were simply the best tool for the job. “They are the best way to truly and reliably capture cryptobenthic biodiversity,” he says. “You will never see anything close to the full biodiversity of the reefs while diving because so much life is concealed in the cracks of rocks and corals.” These hidden organisms, sometimes referred to as the cryptobiome, can represent up to 70 percent of a reef’s biodiversity, yet remain largely understudied. ARMS are typically used to compare biodiversity between reefs in different locations. Still, Rosado is interested in how cryptobenthic communities differ from the established cryptobiome across different habitats within reefs.

In August 2021, Rosado’s and a team of scientists led by marine scientists Michael Berumen and Susana Carvalho placed 32 ARMS on the Tahla reef off the coast near KAUST, dividing them evenly between four distinct reef habitats: branching corals, plating corals, algae pavement and coral rubble. In his M.Sc. project, Rosado is investigating how pioneer (early settlers) and mature (two years post immersion) communities differ across those habitats. 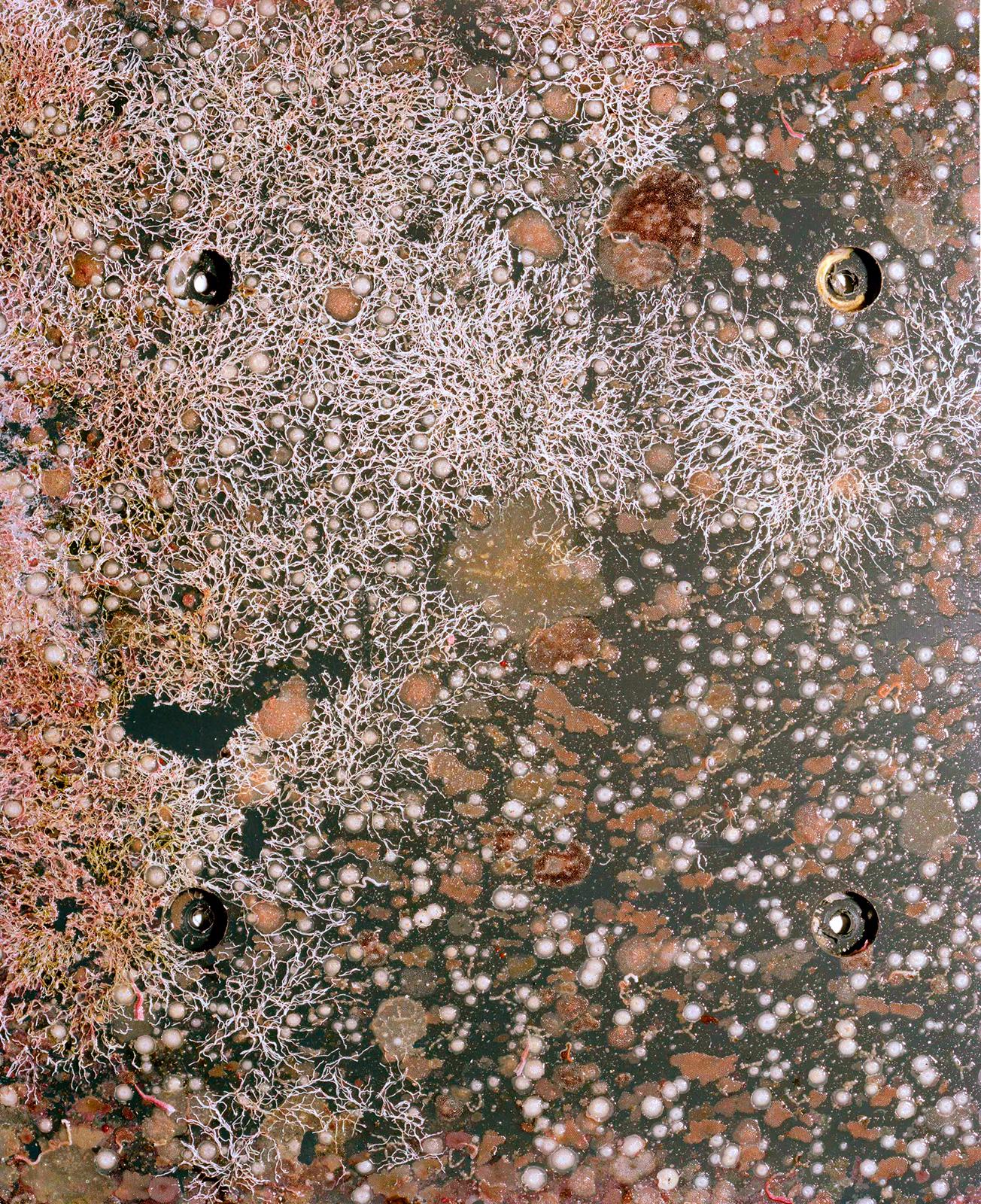 The pioneers. Just as a painting begins with those initial brush strokes that are eventually obscured by the final image, what one sees at the end would not exist without the layers beneath. And without seeing those layers, the observer might miss an important part of the painting’s story. ©2022; Taiyo Onorato and Nico Krebs

“It usually takes two years for ARMS to be fully colonized, but this depends on the region,” he says. “Nature moves at its own pace.” In March 2022, Rosado collected four ARMS from each habitat. “It’s a very intricate process because each structure must be sealed in a container to ensure nothing escapes — such as mobile organisms like fish and crabs — and then incubated each of them in the dark to evaluate the biochemical cycles that take place on it,” he says. “It took one day to deploy all 32 units, but two weeks to retrieve 16.” One of Joao Rosado’s 16 ARMS retrieved after just seven months at sea. The remaining 16 structures will be collected in August 2023. ©2022; Taiyo Onorato and Nico Krebs 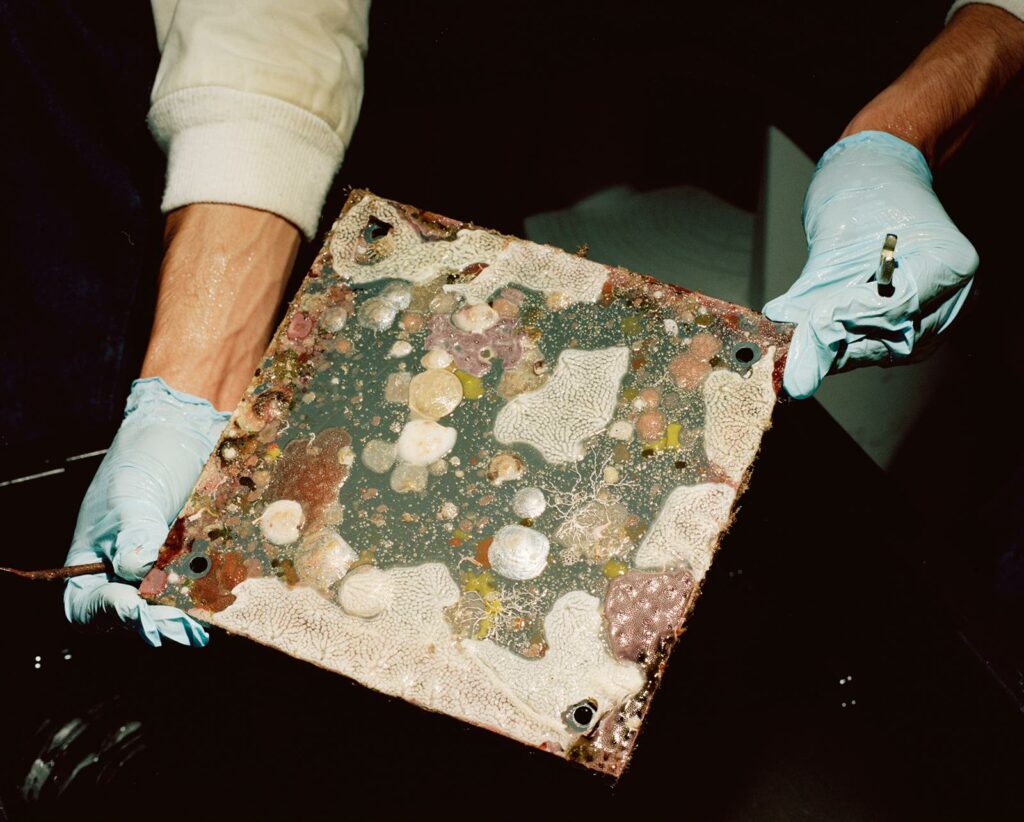 Back in the lab, Rosado blended the organisms on each plate and used DNA metabarcoding to identify and assess this previously hidden biodiversity. “The cryptobenthic communities differ among habitats at each site are mostly distinct even though these habitats are not so distant from each other,” says Rosado. “There is some crossover, but most species are unique to one habitat.” For example, 28 percent of the diversity on the algae pavement appeared nowhere else. “I’m very interested to see whether these communities become more similar or different over time,” he adds. 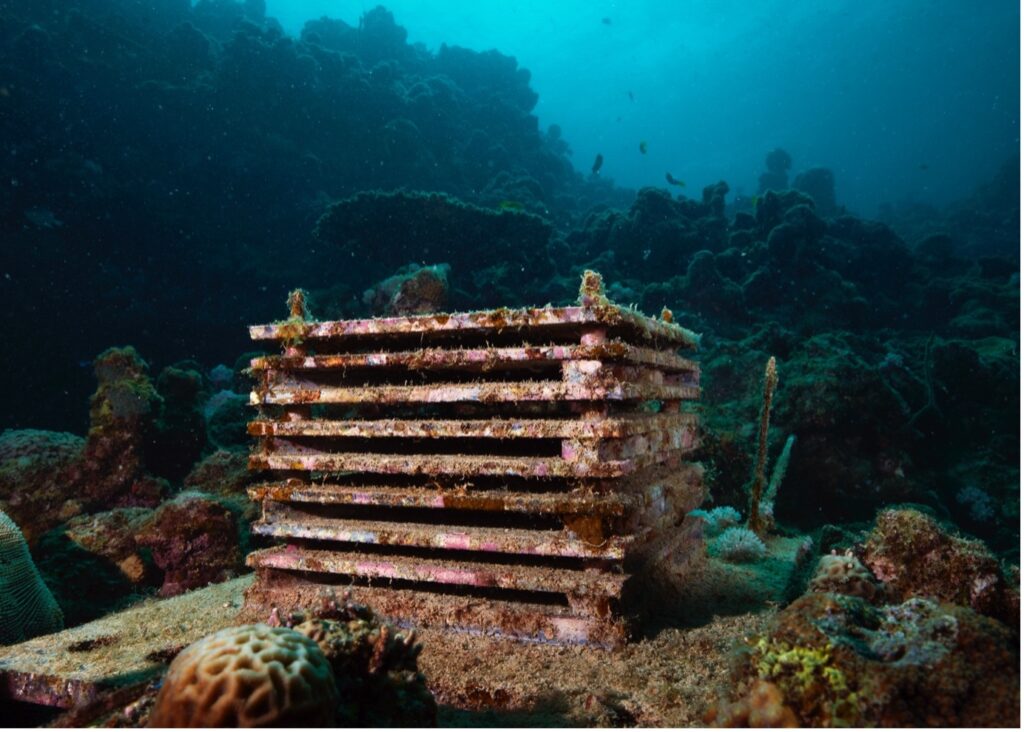 Through the artists’ eyes, these communities almost resembled human societies. “It’s fascinating thinking about how they divide space, enter benevolent or hostile relationships and claim, gentrify and abandon habitats,” says Krebs. “Seeing all this happen in a structure that resembles an apartment building is very thought provoking, but it also makes us question our inherent anthropocentric perspective.” He and Onorato hope their work will encourage people to question what they see. “It would be great if we can inspire more curiosity about the non-human world: a non-invasive, compassionate curiosity,” he adds.

“Art is vital in communicating science,” agrees Rosado. “It reminds us that we can reach out to people. We as scientists can be very focused in academia and in writing papers sometimes, but we can’t achieve much if we only talk amongst ourselves,” he adds. In this, the artists and scientists found common ground. “I was amazed at how obsessive scientists are,” says Krebs. “I thought only artists could get like that.” 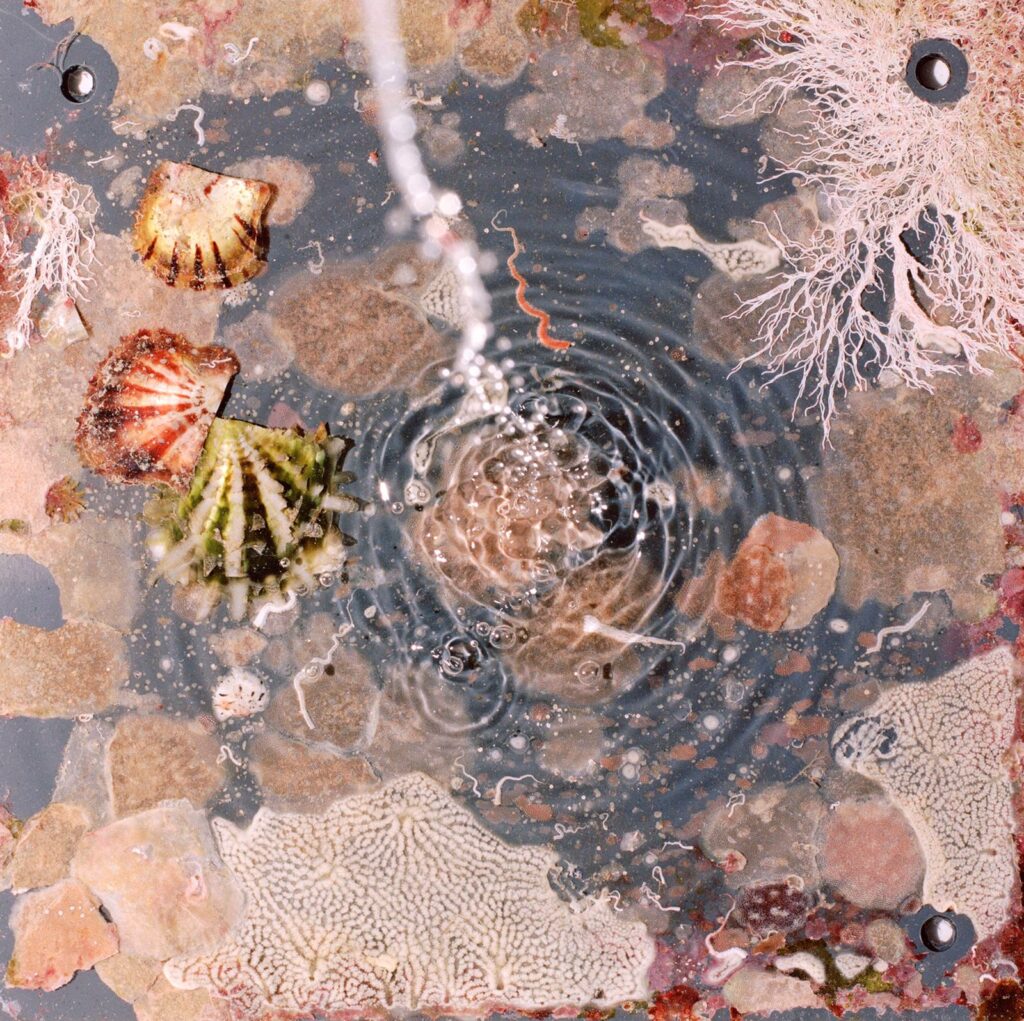 Eye-catching science on a plate. Striking images could inspire people to preserve the aquatic life. ©2022; Taiyo Onorato and Nico Krebs

Marine scientists are currently on a global mission to preserve underwater environments that have been degraded by human activities, especially in light of climate change and local anthropogenic impacts. “Coral reefs are declining, and some reports show that 99 percent of corals might die by 2050 because of global warming,” says Rosado. “We need to reach as many people as we can, and art can deliver a strong message in a way that everyone can understand and interpret.”

“With the pressures that marine systems currently face, there has never been a more important time for outreach and awareness. The Artists in Labs collaborations bring direct benefits to both the scientists and the artists, but there is also an immeasurable increase in the impact that the work has on a broader audience,” says Berumen.