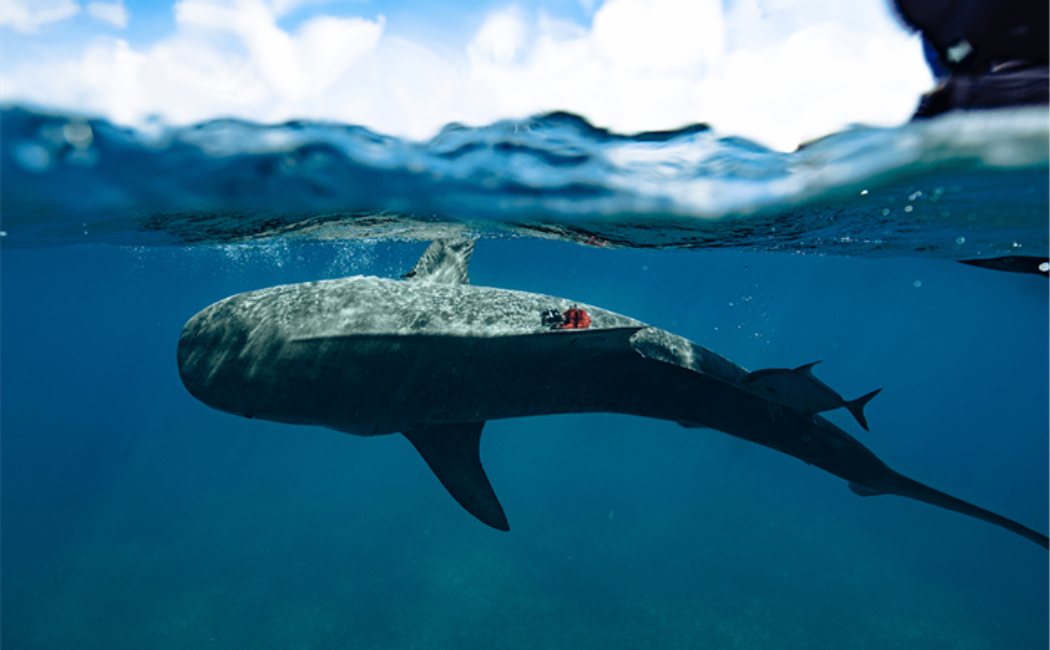 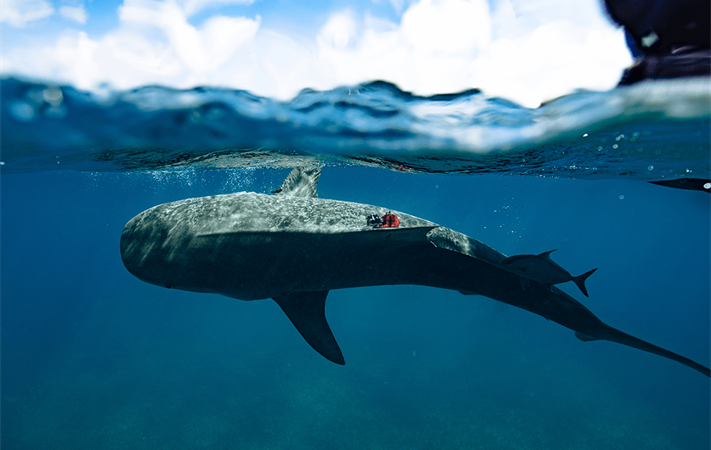 A camera on a tiger shark shows its movements and route as it makes its way across the shallow, sandy ocean floor through seagrass meadows in the Bahamas. Scientists use the data to understand and map the vast seagrass ecosystems. Video courtesy Beneath The Waves

The largest seagrass ecosystem in the world has been discovered and mapped— an area in The Bahamas estimated to be up to 92,000 km2. Findings are published in the scientific journal Nature Communications. The study, "Tiger sharks support the characterization of the world's largest seagrass ecosystem," details the researchers' innovative approach of using camera tags to track the movements of tiger sharks over seagrass meadows, which helped the scientists map and ultimately validate spatial estimates of these vast blue carbon ecoystems in The Bahamas for the first time.


A camera on a tiger shark shows its movements and route as it makes its way across the shallow, sandy ocean floor through seagrass meadows in the Bahamas. Scientists use the data to understand and map the vast seagrass ecosystems. Video courtesy Beneath The Waves

Tiger sharks (Galeocerdo cuvier), the largest marine predator found in tropical seas, have been protected in The Bahamas for more than a decade. Beneath The Waves (BTW), an ocean NGO (non-governmental organization) research institute, has been monitoring the behavior of the species to determine how current and future marine protected areas could be optimized to conserve sharks.

"This is when the lightbulb first went off, so to speak," noted Gallagher, who showed the videos to collaborator and senior co-author on the study, Professor Carlos Duarte (King Abdullah University of Science and Technology, Saudi Arabia), a global leader in seagrass ecology. 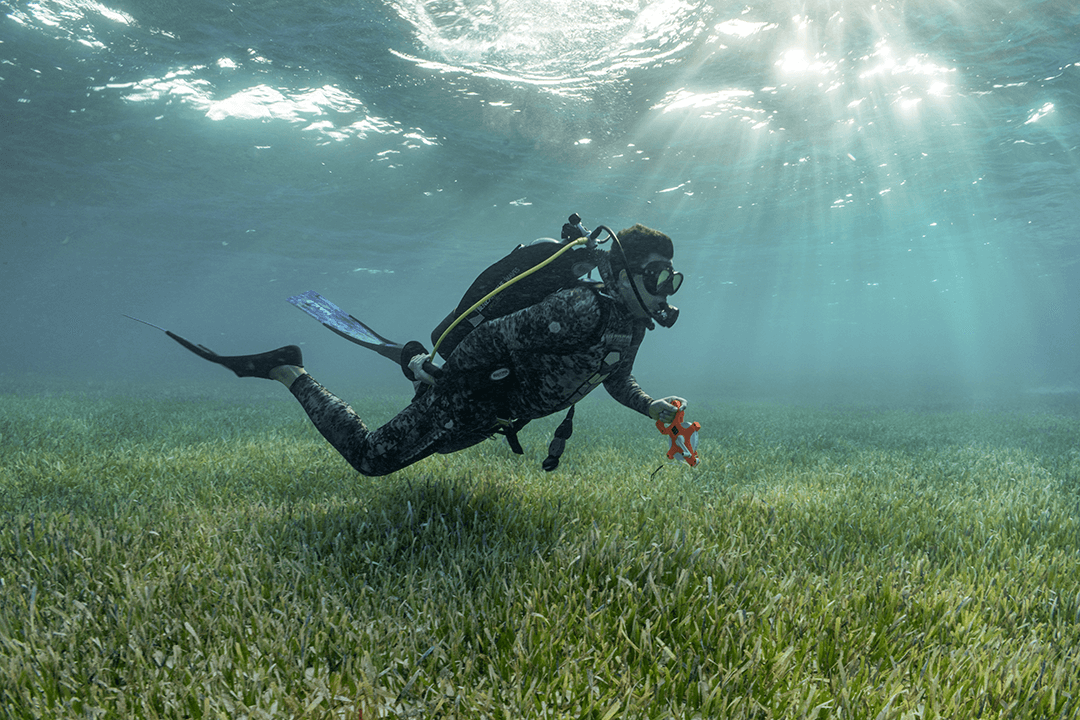 Dr. Austin Gallagher, CEO and lead scientist with NGO Beneath The Waves, takes data on seagrass beds in the Bahamas as part of a Nature Communications study involving the mapping of seagrass meadows using tagged tiger sharks. Photo courtesy of Cristina Mittermeier

When Duarte viewed the data the tiger sharks had produced, he was inspired to dig deeper. "The marine ecosystem in The Bahamas, which two decades ago I was able to admire in awe from a commercial plane, contains the largest sand banks in the world, which are shallow habitats perfectly suited to growing seagrass," Duarte said. "We thought that The Bahamas likely had an extensive seagrass ecosystem, but the true spatial estimate had never been properly quantified, because surveying this vast area remains challenging."

Seagrass meadows cannot be readily mapped from space, as they yield signals similar to those of seaweed and are often covered by carbonate deposition, which returned a glare, or backscatter, similar to that of bare sand. 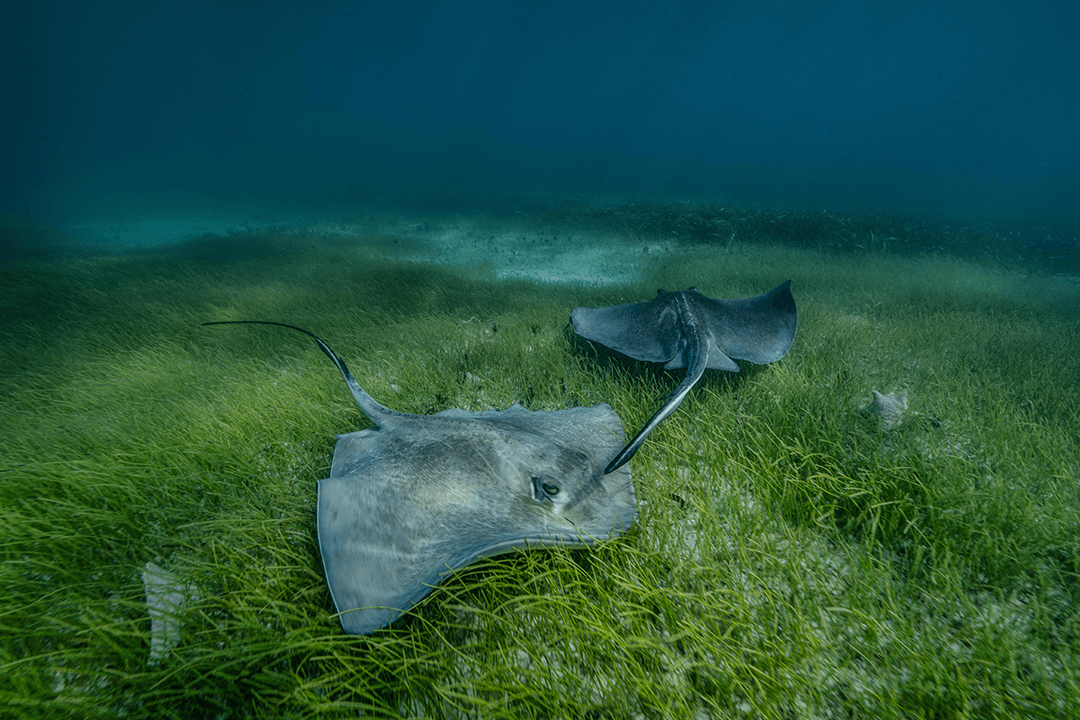 Stingrays, shown here resting in seagrass meadows on the shallow, sandy ocean floor of the Bahamas, are among the many marine animals that make seagrass habitat home. Photo courtesy of Cristina Mittermeier

In order to map the total area covered by seagrass in The Bahamas, the team performed their own remote sensing analysis, while integrating previous satellite imagery estimates, to generate a composite estimate of the Bahamas seagrass ecosystem.These records were paired with extensive ground-truthing validation, involving more than 2,400 diver seagrass surveys throughout the area. Working with tiger sharks allowed the researchers to map even more seafloor.

"Research led by Beneath The Waves had shown that tiger sharks spend about 72% of their time patrolling seagrass beds, which can be observed by the 360o cameras we deployed on the sharks, for the first time in marine animals," Dr. Duarte said. "This provided an opportunity to expand ground-truthing across the vast, challenging depths of the Bahamas Banks, as tiger sharks cover about 70 km in one day and are not constrained, as human divers are, to shallow depths."

The additional validation provided by tiger sharks helped raise the estimates of the area seagrass habitat across The Bahama Banks from a minimum of 66,000 km2 up to 92,000 km2. 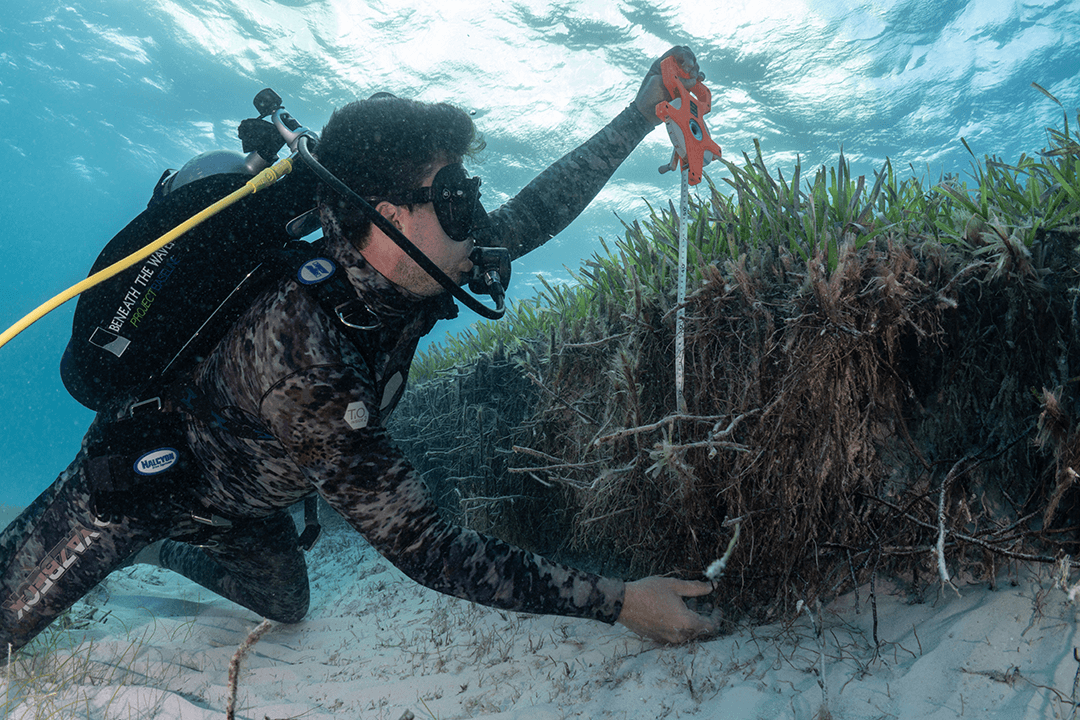 Dr. Austin Gallagher, CEO and lead scientist with NGO Beneath The Waves, takes data on seagrass beds in the Bahamas as part of a Nature Communications study involving the mapping of seagrass meadows using tagged tiger sharks. Photo courtesy of Cristina Mittermeier

This first-time arrangement using camera tags on tiger sharks provides a model for collaborating with large marine animals to explore the ocean. The research team also collected sediment cores from the extensive seagrass ecosystem to evaluate how much carbon is stored in the sediment, ultimately revealing that The Bahamas likely holds up to 25% of the global stock of seagrass-based blue carbon.

The Prime Minister of The Bahamas, Philip Brave Davis, has emerged as a key leader for the region's climate change advocacy. "The innovative work done by Beneath The Waves, in partnership with Bahamians, to map our country's vast seagrass meadows, represents extraordinary scientific progress, and will make a very significant contribution to our national development and security. The Bahamas may be in the top of rankings on climate vulnerability, but we now have evidence that we top the list of the world's blue carbon hotspots, too – which means our seagrasses can play a critical role in generating the resources we need to transition to renewable energy and to adapt and become more resilient to the changing climate."

"This discovery should give us hope for the future of our oceans," Gallagher said. "It also demonstrates how everything is connected. Because tiger sharks had been protected in The Bahamas for many years, we were able to study and monitor the ancient processes these animals had been engaged in for millennia. The sharks led us to the seagrass ecosystem in The Bahamas, which we now know is likely the most significant blue carbon sink on the planet. If protected, these seagrasses can play a crucial role in slowing the climate emergency, as the world moves to deploy a diverse range of strategies to capture carbon from the atmosphere," Gallagher said.

The study's diverse author list, comprised of scientists, divers, conservationists, local stakeholders and storytellers, represents an innovative, solutions-oriented approach to science that is needed to restore our oceans to abundance.