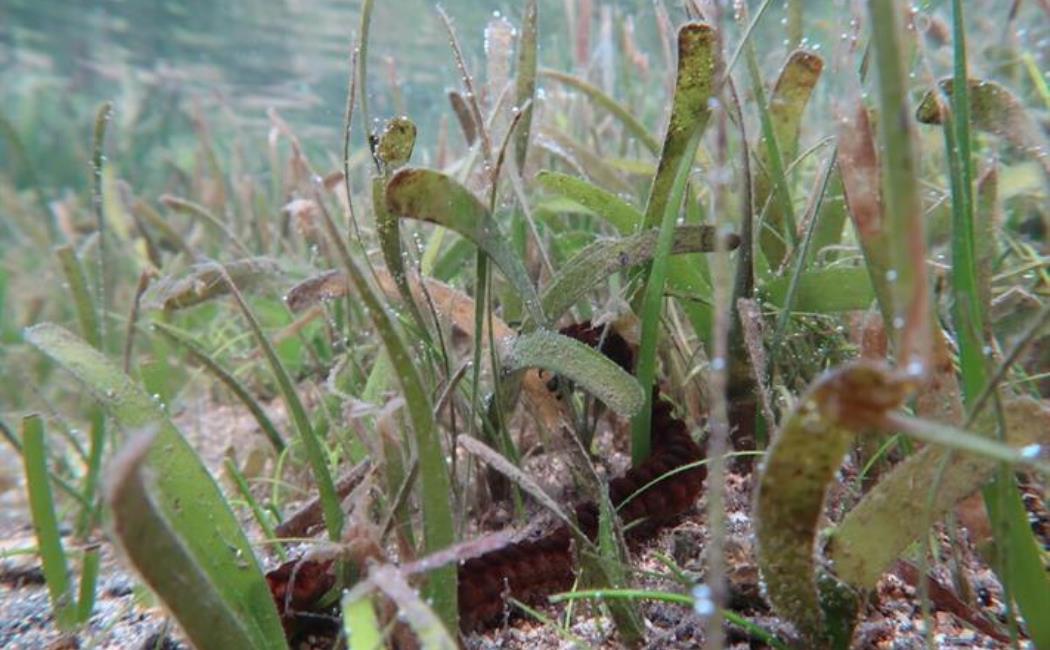 Reduced oxygen availability in aquatic habitats is a growing threat to marine ecosystems worldwide. The lack of oxygen triggers many physiological actions in marine animals, generally endangering their homeostasis and rendering them highly susceptible to modifications in the environment, such as temperature, salinity and contaminants.

Although the Red Sea is the warmest sea in the world, its crystal-blue waters also provide the ideal environment for photosynthetic organisms to produce a lot of oxygen during the warmest parts of the day. This helps coastal marine animals like crabs, sea cucumbers and shellfish to increase their resilience to rising temperatures.

In a joint study between KAUST and the University of Padova (UNIPD), Italy, an interdisciplinary team of researchers spent the last year studying how hyperoxia, or excessive oxygen supply, extends heat tolerance in marine ectotherms. 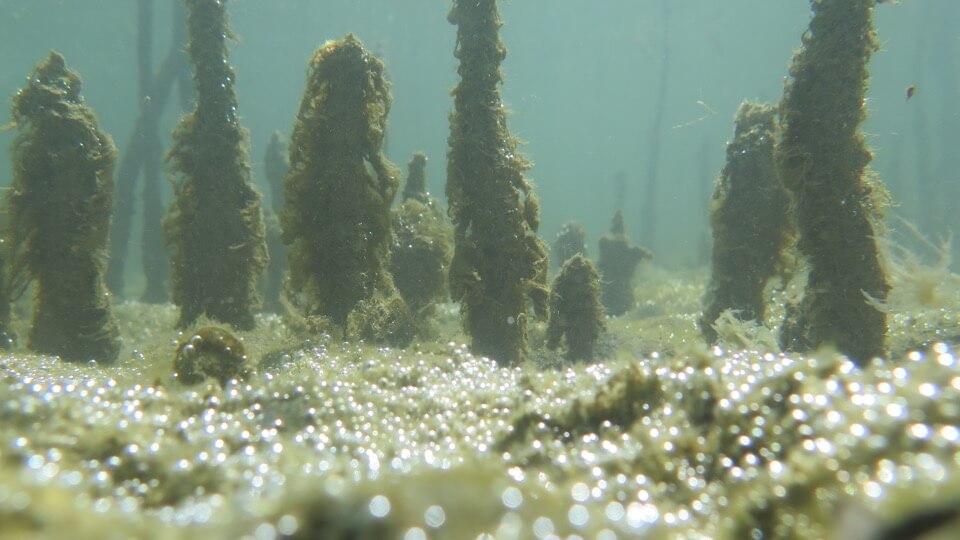 An algal biofilm produces oxygen in the middle of mangrove pneumatophores. Photo by Marco Fusi.

The research team spent the past 12 months studying how ocean warming impacts the survival and fitness of marine organisms in the Red Sea. They found that in coastal habitats—like that of the Red Sea—animals live in close association with photosynthetic organisms whose oxygen supply supports their metabolic demands and may compensate for acute warming.

"Reduced oxygen availability triggers many physiological processes in marine animals that usually jeopardizes their homeostasis. Oxygen availability in aquatic habitats may represent a major threat for ectothermic species since it is tightly connected to their capacity to endure warming and thermal stress, and [it] ultimately affects organismal survival," Fusi explained. 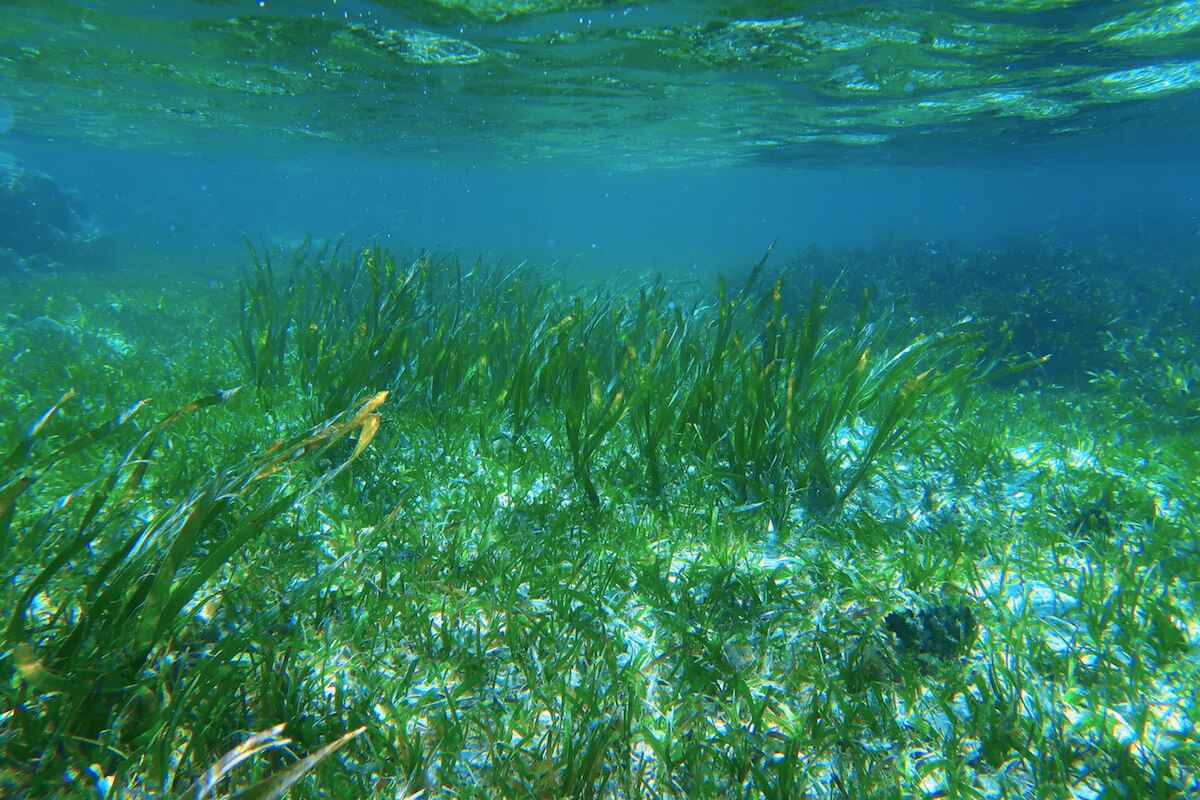 Our paper [sheds] new light on the role of oxygen in the thermal tolerance of aquatic animals living in coastal waters," he continued. "Photosynthetic organisms, such as algae, corals, mangroves and seagrasses, release a large amount of oxygen during their daily photosynthetic activities that oversaturates the seawater. This oxygen creates the equivalent of a hyperbaric chamber during the warmest part of the day that increases the thermal resistance of the ectothermic species living within. This discovery can help to explain why⁠—even in the warmest sea of the world, the Red Sea⁠—coastal water hosts a thriving diversity of marine species [ranging] from fishes to sea stars [and] from mollusks to lobsters and so on." 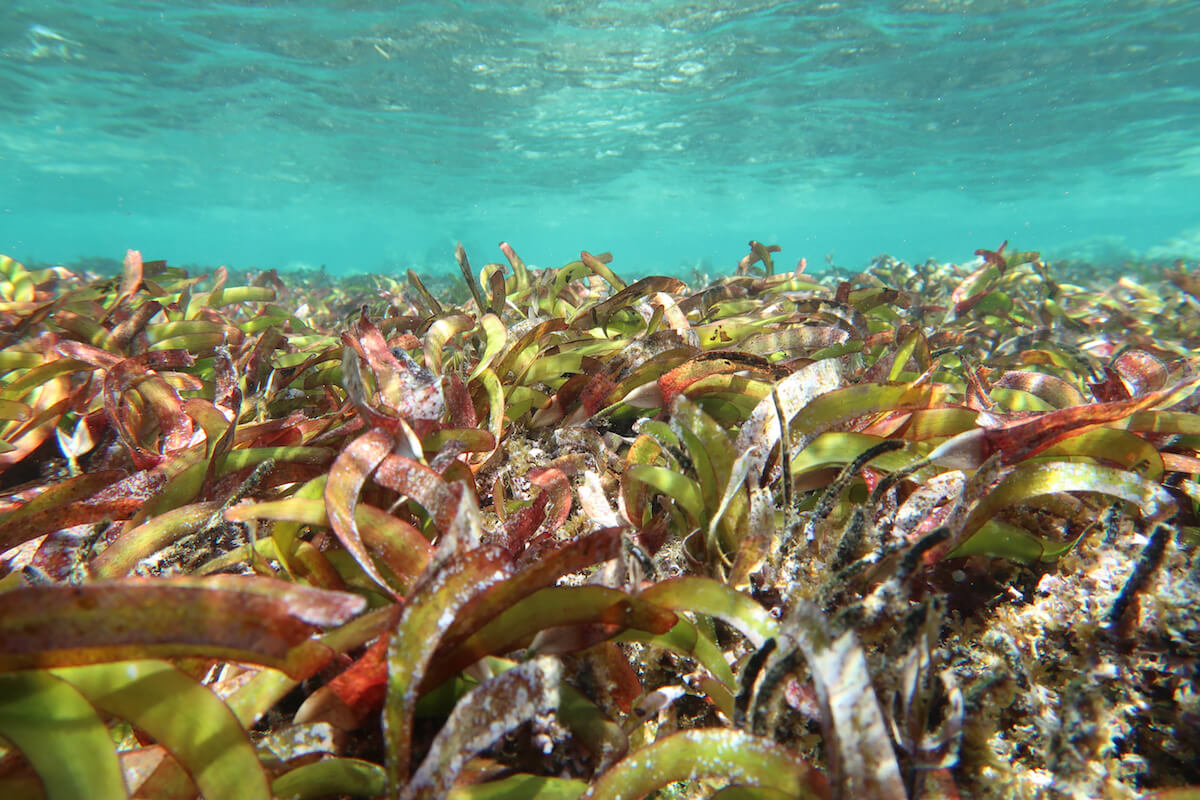 The genesis of the KAUST co-authored paper goes back to the years Fusi spent immersed in the mangrove forests and seagrass meadows of the Indian Ocean coast during his Ph.D. studies.

"I spent a lot of time studying the effects of global warming on keystone species in mangroves," Fusi said. "It surprised me that some of these aquatic species, during the hottest part of the day—instead of finding shelter in their burrows or under the canopy of the forest to avoid high temperatures—sheltered in tidal pools or in parts of the mangrove creek densely populated by seagrasses and other seaweed, where the water temperature regularly peaked up to 40°C.

"[This is] near [to] the lethal limit for these species. I thought, 'There must be something else [going on],' so, I started to measure other parameters and found that these 'refugees' were highly hyperoxic, with water oxygen saturation up to 200 to 250 percent.

"The link between my observations and the effect of hyperoxia was quite immediate," he noted. "When I joined the KAUST ESM Lab, I proposed [the] research hypothesis to Professor Daffonchio...Together with Dr. Folco Giomi and Professor Duarte and Professor Agusti's lab, we tested the hypothesis that higher levels of oxygen in water [are] the key element...extend[ing] the thermal tolerance of marine animals living in association with photosynthetic marine ecosystems such as mangroves, seagrasses and coral reefs." 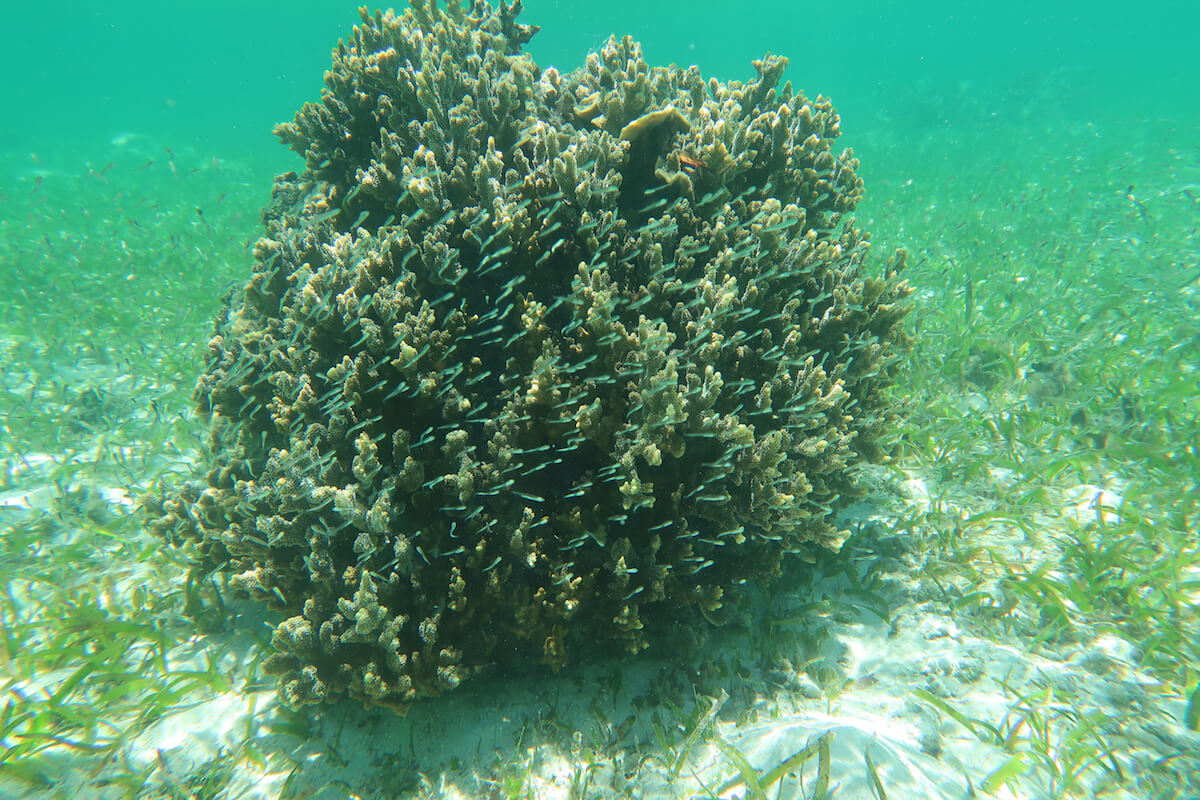 To examine their hypothesis, the team at KAUST has been modeling water temperatures and oxygen concentrations over the course of a year. They predicted that oxygen supersaturation from photosynthetic activity invariably fuels peak animal metabolic demand. This represents an underestimated factor of resistance and resilience to ocean warming in ectotherms. 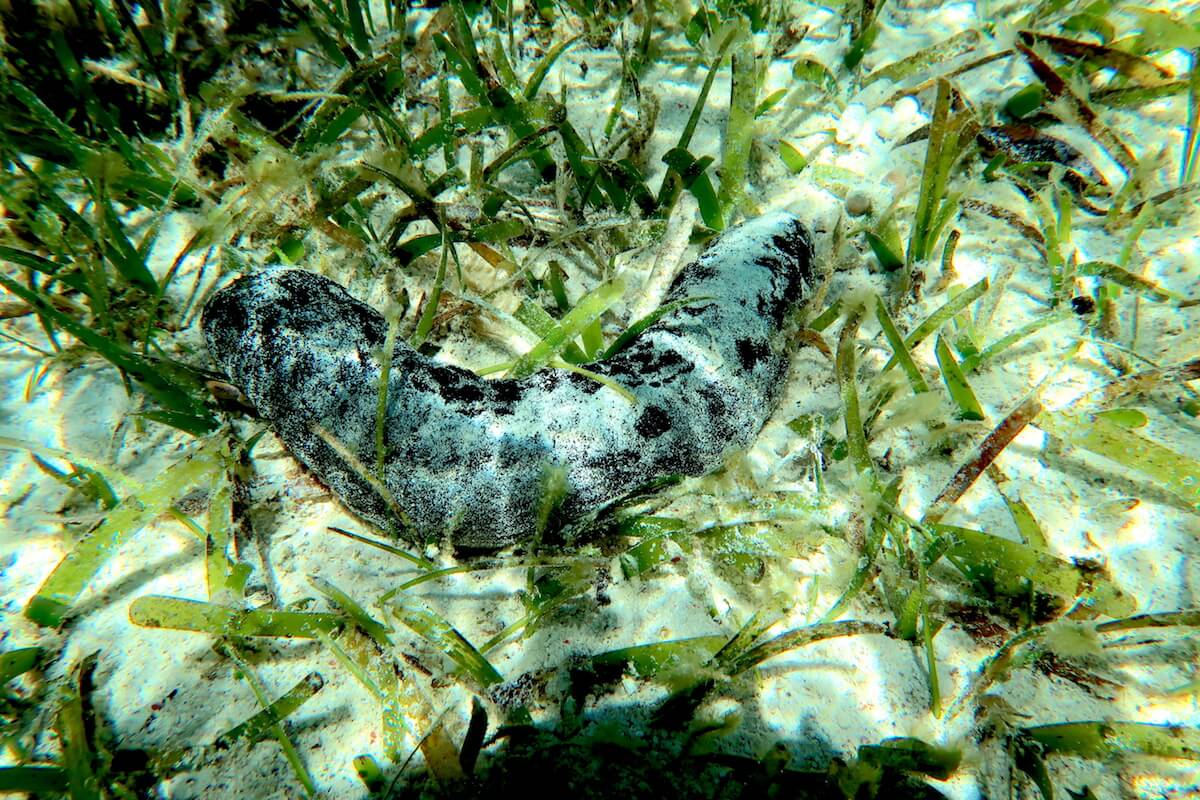 "[Through our findings,] we show a clear coupling between diel changes in water temperature and dissolved oxygen in vegetated coastal habitats in the Red Sea and experimentally demonstrate that hyperoxia during the warmest hours of the day enhances the survival scope of marine animals under high to extreme water temperatures," stated Fusi.

"We experimentally demonstrated that oxygen supersaturation extends the survival to more extreme temperatures of six species from four phyla. We clarified the mechanistic basis of the extended thermal tolerance by showing that hyperoxia fulfills the increased metabolic demand at high temperatures," he added. 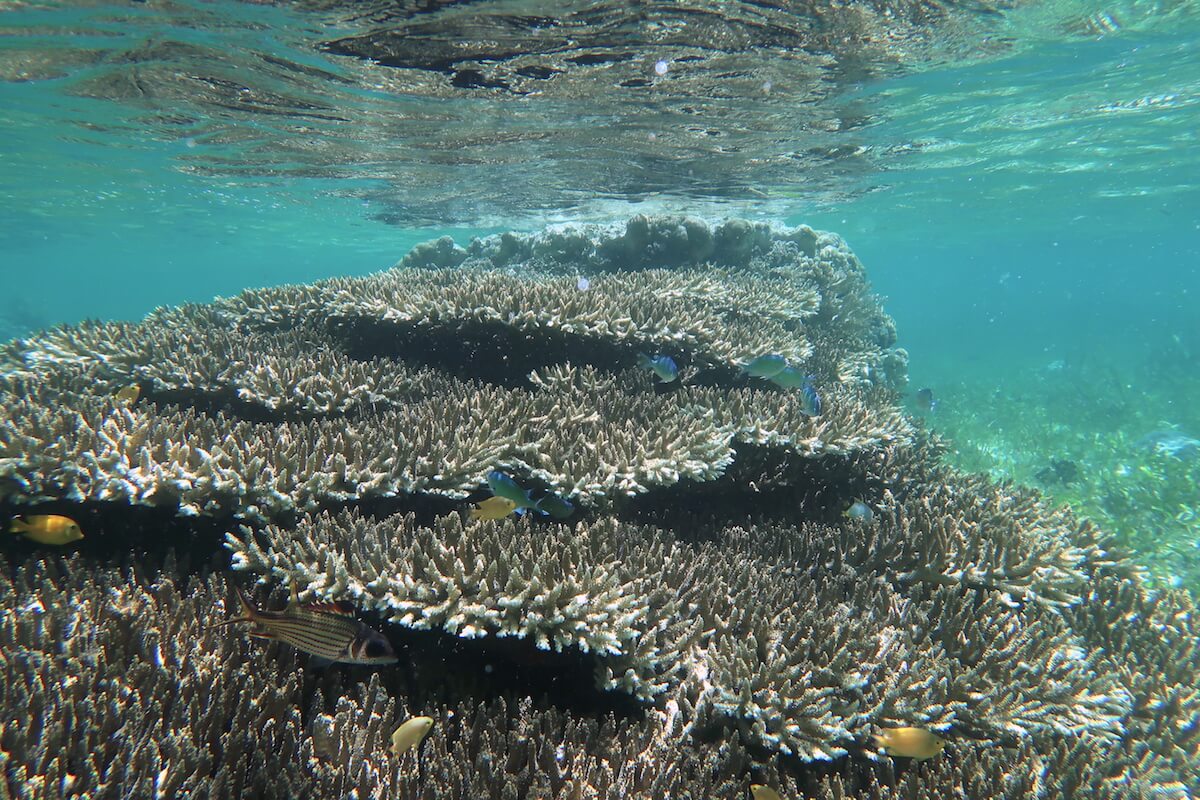 "Furthermore, these findings can also explain one of the mechanisms by which animals can be protected by abnormal events such as heatwaves," Fusi said. "Additionally, this paper improves our understanding of the daily variability of oxygen and temperature⁠—an aspect often overlooked in many papers dealing with marine species and climate change. While lots of studies are based on testing temperature changes, there are few that test different concentrations of oxygen. With this paper, we [aim] to pave the way toward the importance of ecologically relevant approaches whose results would produce more efficient and reliable predictions to foresee climate change scenarios effectively."

The Red Sea represents a unique natural laboratory in which to test Fusi's hypotheses related to climate change and global warming. The environment of the Red Sea also inspires solutions to pre-existing ectotherm/high temperature concerns. The interdisciplinary team's research findings can help to highlight how other seas will respond to the increases in global marine temperatures brought about by climate change. 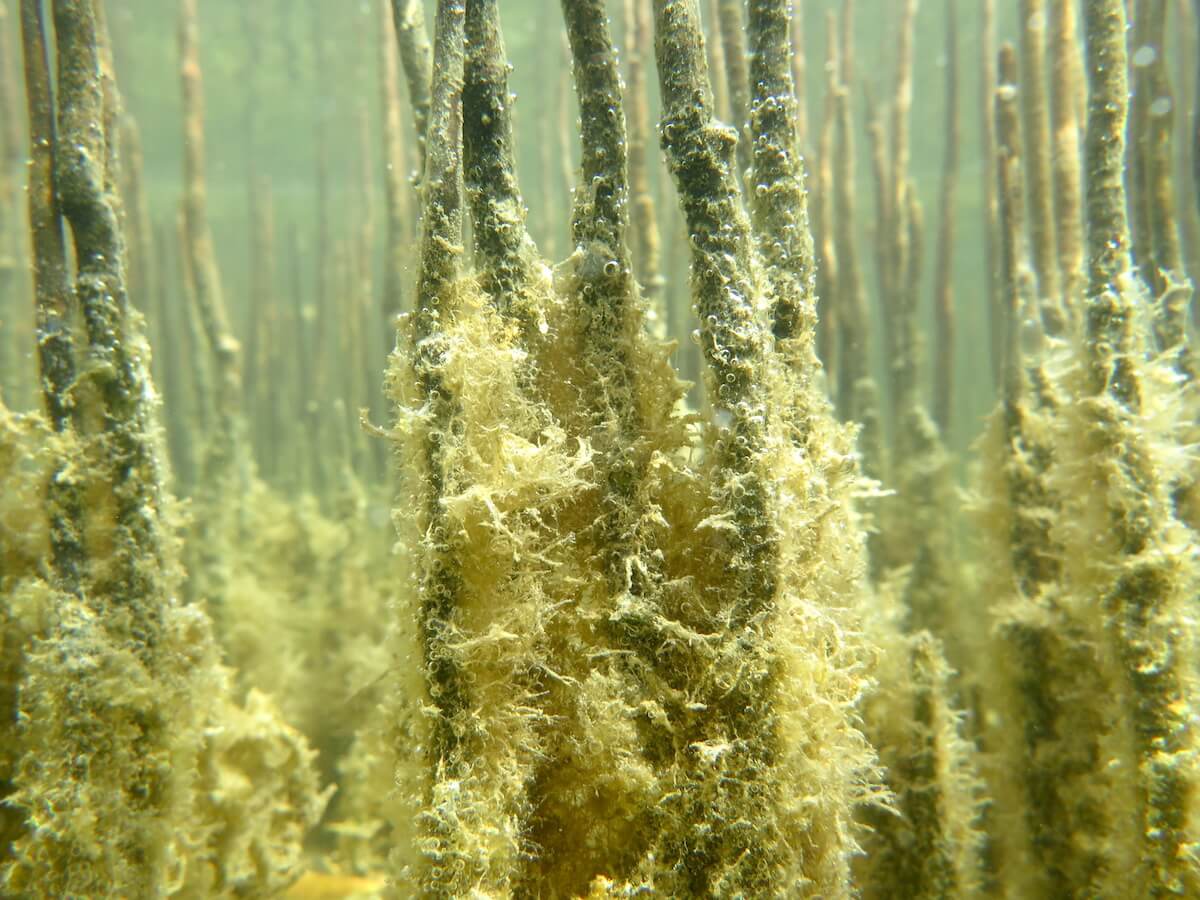 Pneumatophores of the mangrove Avicennia marina are pictured here with seaweed growing on them. The seaweed releases oxygen into the water. Photo by Marco Fusi.

Fusi and his fellow researchers believe that hyperoxia is an important aspect to take into consideration when it comes to future sustainable coastal development. They also foresee that the effect of this underestimated mechanism has an ocean-wide relevance.

"Our study showed that photosynthetic coastal ecosystems have an important role in protecting marine fauna," he noted. "Previous studies have shown that these ecosystems buffer ocean acidification by removing carbon dioxide, and with our study, we show that by adding oxygen to the water, these ecosystems extend the thermal tolerance up to 3°C of the associated ectotherm species, protecting from heat events and higher temperatures." 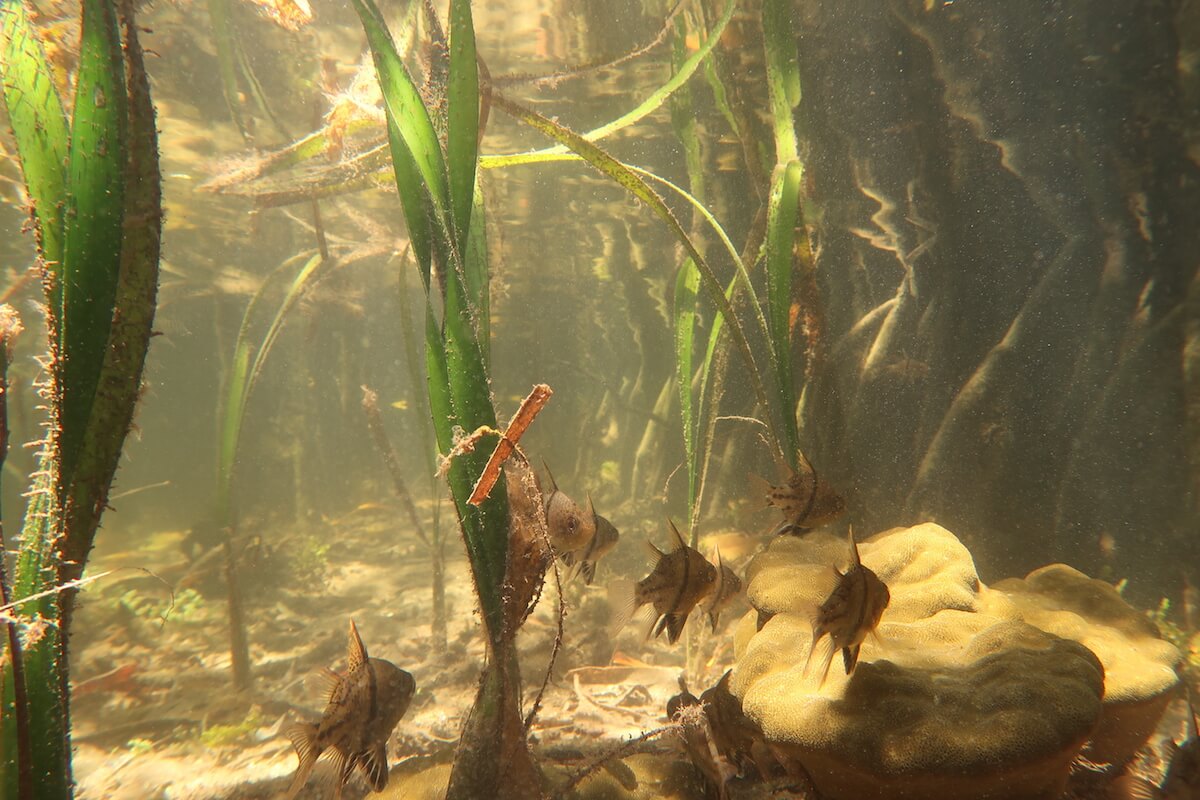 A complex ecosystem is pictured here that includes mangrove roots, seagrasses and coral that host many species. A species of cardinalfish, common in tropical waters, swims near the coral. Photo by Marco Fusi.

"However, the effort to protect these ecosystems worldwide is still scarce and largely ineffective. We hope that with this contribution, we can create awareness of the multiple benefits of a healthy coastal environment in order to plan effective coastal management and to increase the sustainability and protection of such important natural assets, especially in seas like the Red Sea," Fusi said.

"Solutions in urban terrestrial environments have been adopted to provide healthier and cleaner environments⁠—such as the visionary project of The Fabbrica dell'Aria (Air Factory), the first prototype of an innovative concept which reduces indoor pollution. [This was] created by neurobiologist Stefano Mancuso and PNAT, a collective made up of designers, architects and biologists. We hope that this study can inspire similar systems to improve the health of our coastal waters," Fusi concluded.