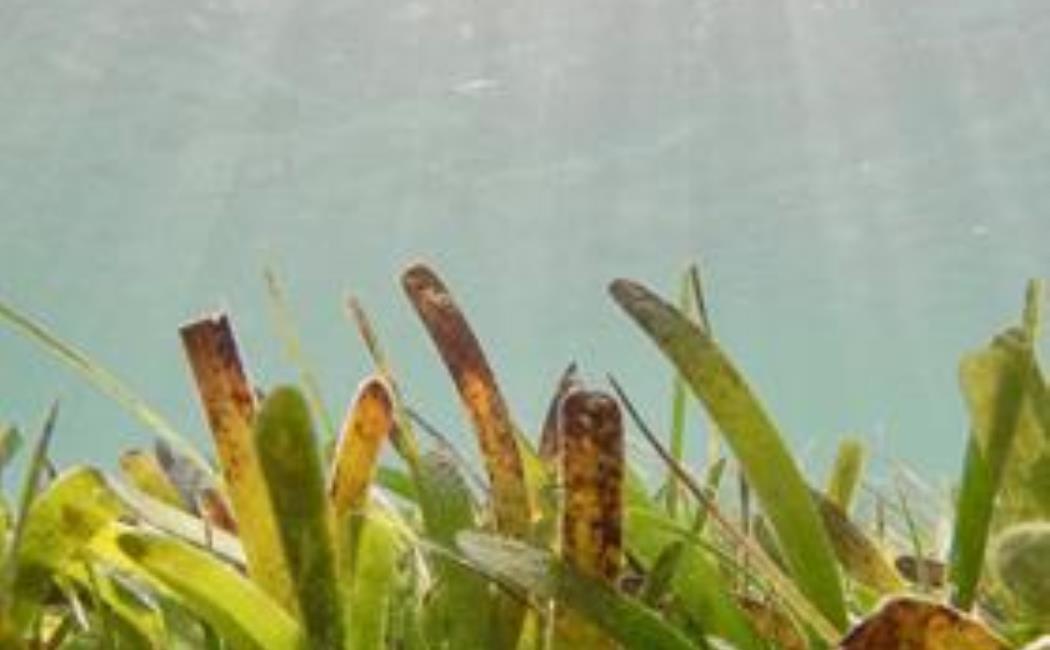 Perched on a branch among dense green foliage, a Mangrove reed warbler is nearly hidden from view but for its call, which reveals its location from among the mangroves. Another reed warbler answers the call, and birdsong animates the trees. 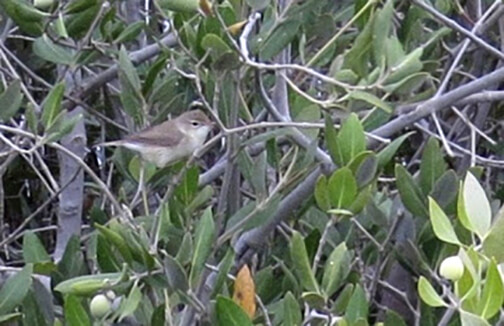 The mangroves at KAUST are thriving. Designated for nature and research, 152 hectares of university land harbor more than 90 hectares of protected mangroves at KAUST Ibn Sina Field Research Station & Nature Conservation Area. More than 240 species of resident and migrant birds shelter here throughout the year.

The birds are one of many inhabitants in a web-of-life ecosystem that spans from land to sea. With woody roots that grow in shallow coastal waters, the salt-tolerant plants provide food, shelter and nursery habitat for many other animals, including crabs, lizards, shrimp, mollusks, and fish. 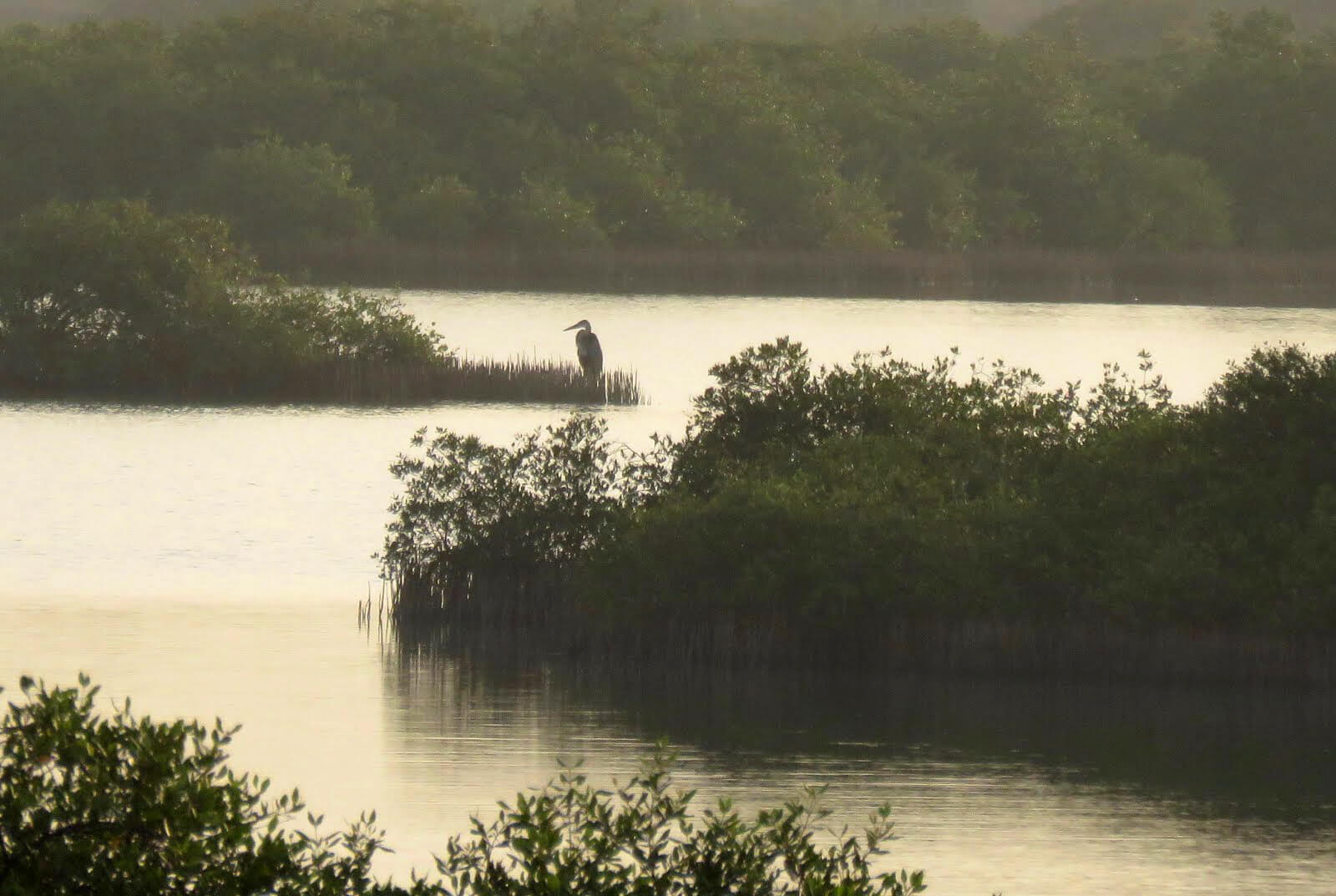 A heron surveys its surroundings from a canopy perch in mangrove wetlands at dusk. Photo: KAUST

The sanctuary is also a living laboratory for researchers. KAUST scientists study the extent to which these plants benefit the environment, and why they are among the most productive ecosystems on Earth. 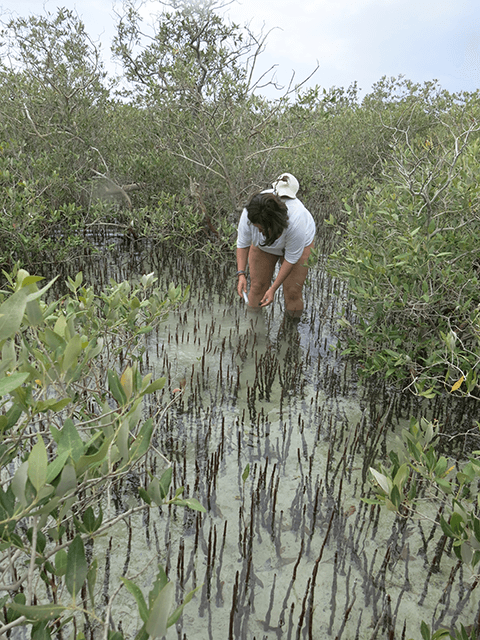 Avicennia marina is the predominant species of mangrove found at KAUST and throughout the Red Sea region. The name derives from Ibn Sina, or Avicennia (980-1037), a scholar during the Islamic Golden Age whose writings are considered to provide the first descriptions of the natural history of the Red Sea and life cycle of the mangroves.

Scientists and students in the Red Sea Research Center are building on this knowledge by researching how mangroves sequester, capture and store carbon dioxide (C02) from the atmosphere, help improve water quality with their tissues and roots, and support other ecosystems, such as coral reefs.

Like terrestrial trees and land plants, mangroves remove C02 from the atmosphere, yet they bury this carbon at a rate 30 times higher than that of boreal, tropical and temperate forests. What makes mangroves different is that they "sink" captured C02, microalgae, and other dead organic matter trapped by their aerial roots into layers of rich sediment, where carbon is stored, undisturbed, for centuries and even millennia. 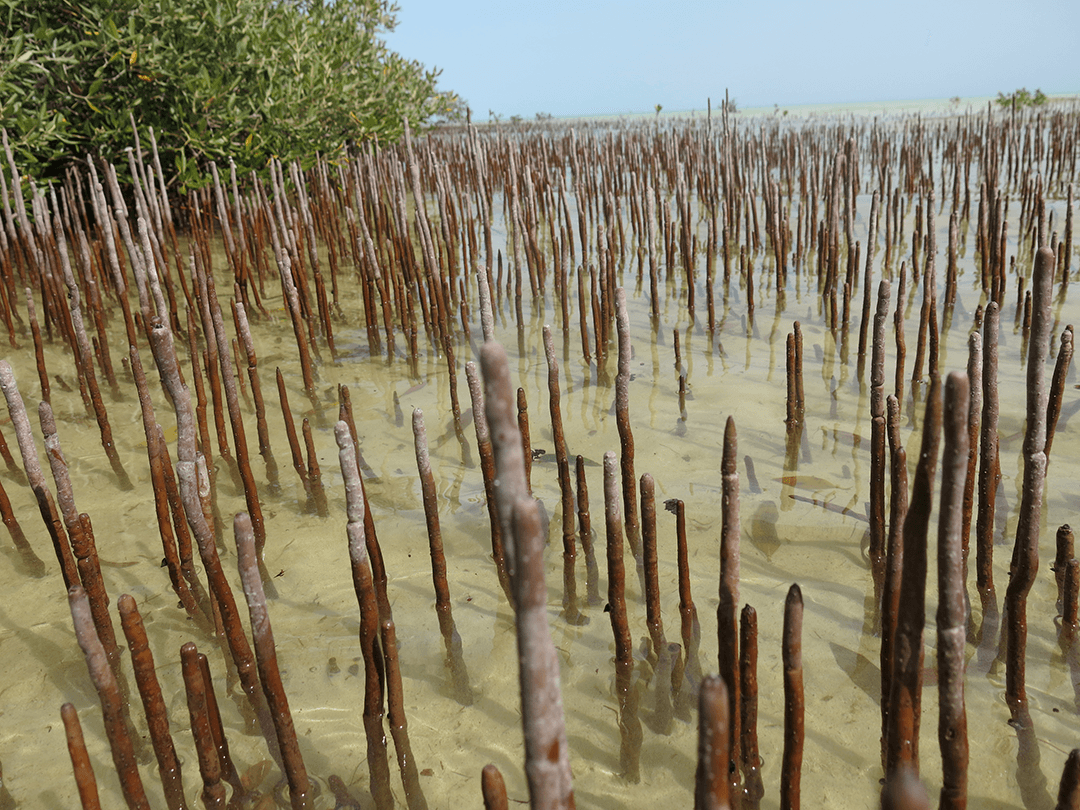 Dead wood and leaves composed of carbon do not degrade as readily in the sea as on land due to lack of oxygen in mangrove soils. Over time this material develops into a dense carbon stock. Carbon buried in marine sediments is called blue carbon, thus mangroves are blue carbon sinks.

Mangroves represent only 0.7% of tropical forests worldwide, and are distributed in 0.5% of global coastal ocean areas, yet they contribute 1% of carbon sequestered by the world's forests, and 14% by global oceans. They offer additional services by buffering shores from erosion, storms and rising sea levels, promoting biodiversity, and providing coastal communities with fish and seafood for subsistence. 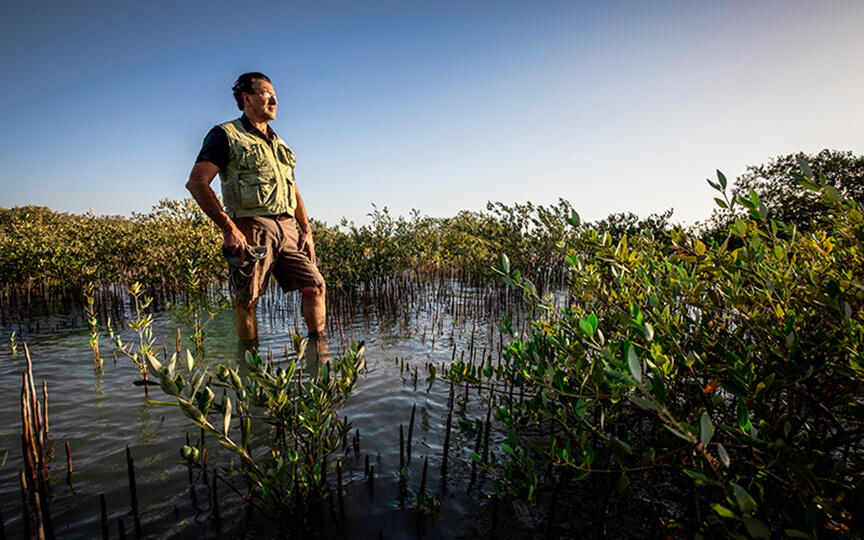 Dr. Carlos M. Duarte, KAUST professor of marine science in the Red Sea Research Center, is a world expert on blue carbon ecosystems. His research led to the formulation of the Blue Carbon concept, an achievement for which he was awarded the distinguished BBVA Foundation Frontiers of Knowledge Award in Ecology and Conservation Biology in 2020.

"At the beginning of this century, mangrove forests, seagrass meadows and salt marshes were under appreciated components of the marine ecosystem, to the extent that I nicknamed them the ugly ducklings of biological conservation," Duarte reflected.

"Today, blue carbon strategies of mitigating greenhouse gas emissions through the conservation and restoration of these habitats have been adopted by many nations as a key means of meeting their commitments under the Paris Agreement."

Carbon burial is one way in which mangroves are effective carbon sinks. Calcium carbonate dissolution is another. The research findings of KAUST marine biologist Dr. Vincent Saderne, a collaborator of Duarte's, show that limestone (calcium carbonate) dissolution in mangrove sediments contributes to C02 removal in seawater, and that Red Sea mangroves dissolve carbonate in their soils at a rate six times greater than mangroves in other parts of the world. 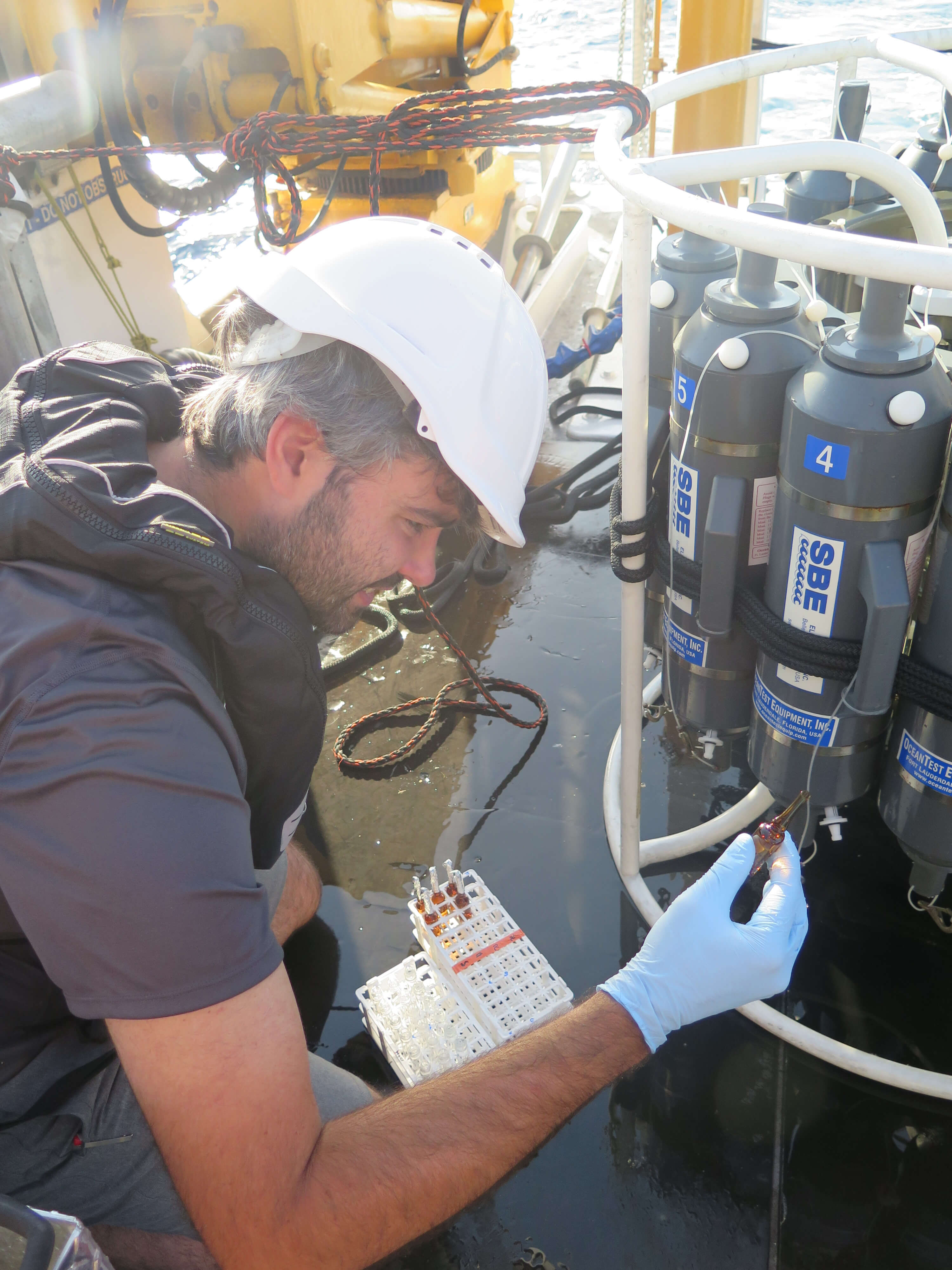 This ability of mangroves to dissolve large quantities of carbonates increases total alkalinity, which modifies the carbon chemistry of seawater and allows the ocean to increase its capacity to store C02 from the atmosphere. This, in turn, offsets ocean acidification and the greenhouse effect, which helps to control Earth's temperature.

"Red Sea mangrove forests are modest in height and extent compared to other mangroves of the world," Saderne said. "However, as we extend blue carbon accounting beyond organic carbon burial, we are astonished by their potential as atmospheric C02 sinks."

Over time, sediments accreted by Red Sea and Arabian Gulf mangroves, and also those from seagrass beds and salt marshes, elevate the coastal seabed, which protects vulnerable areas of the Saudi coastline against global sea level rise. 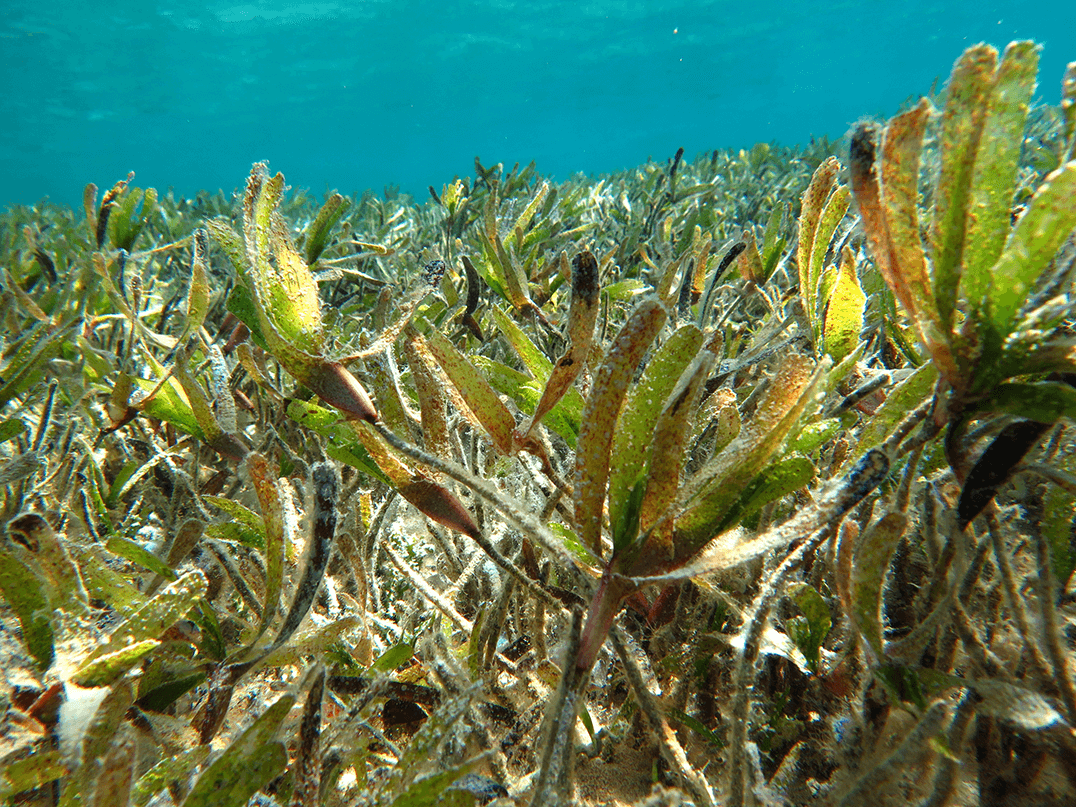 Seagrasses are blue carbon ecosystems with a similar range of ecological services as mangroves. The flowering marine plants grow horizontally to form extensive meadows in shallow coastal waters and lagoons.

The Red Sea is a unique region for KAUST scientists to study them for several reasons. It hosts a high diversity of seagrasses, with 12 species identified. Unlike other seas, the Red Sea is exceptionally salty, with no input from freshwater sources, and very warm. These unusual conditions bring opportunities to compare seagrass species here to others around the world.

Marine biologist Dr. Neus Garcias-Bonet, former postdoctoral researcher at KAUST in Professor Carlos Duarte's research group, surveyed seagrass meadows in the Red Sea region to measure concentrations and stocks of carbon and nitrogen in their sediment. Like mangroves, seagrasses remove carbon dioxide from the atmosphere and sink this carbon, captured in their own leaves and dead organic sea matter, into thick carbon sediment.

By trapping particles suspended in the water column, seagrasses help stabilize the sediment, reduce turbidity, and make the water clearer. Protected from storms and waves under the plants above and deprived of oxygen, the carbon degrades very slowly. 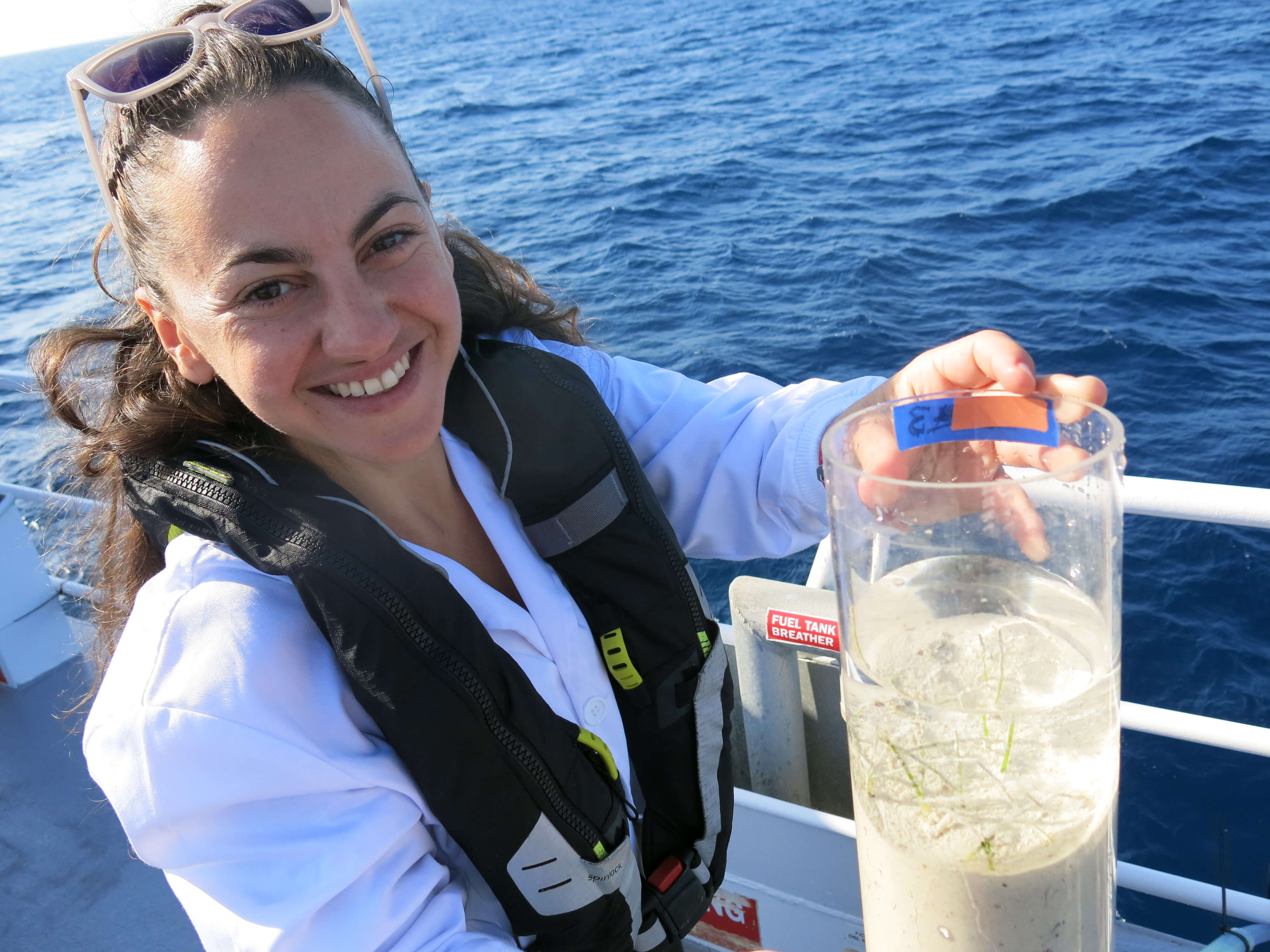 Dr. Neus Garcias-Bonet holds a sample of seagrass sediment collected in the Red Sea, which will be used to assess carbon and nitrogen stocks. Photo: Dr. Vincent Saderne / KAUST

"Seagrass meadows do a great job at keeping the stored carbon in place for long time scales," she said. "Even though seagrasses are restricted to coastal areas and their relative coverage is small, these ecosystems are responsible for 20% of the total organic carbon buried in the ocean."

Red Sea seagrasses can grow in highly warm water, even reaching temperatures of 35-degree Celcius. She said this shows they have adapted to live in harsh conditions of high salinity and high temperatures, which could help them endure future warming conditions. 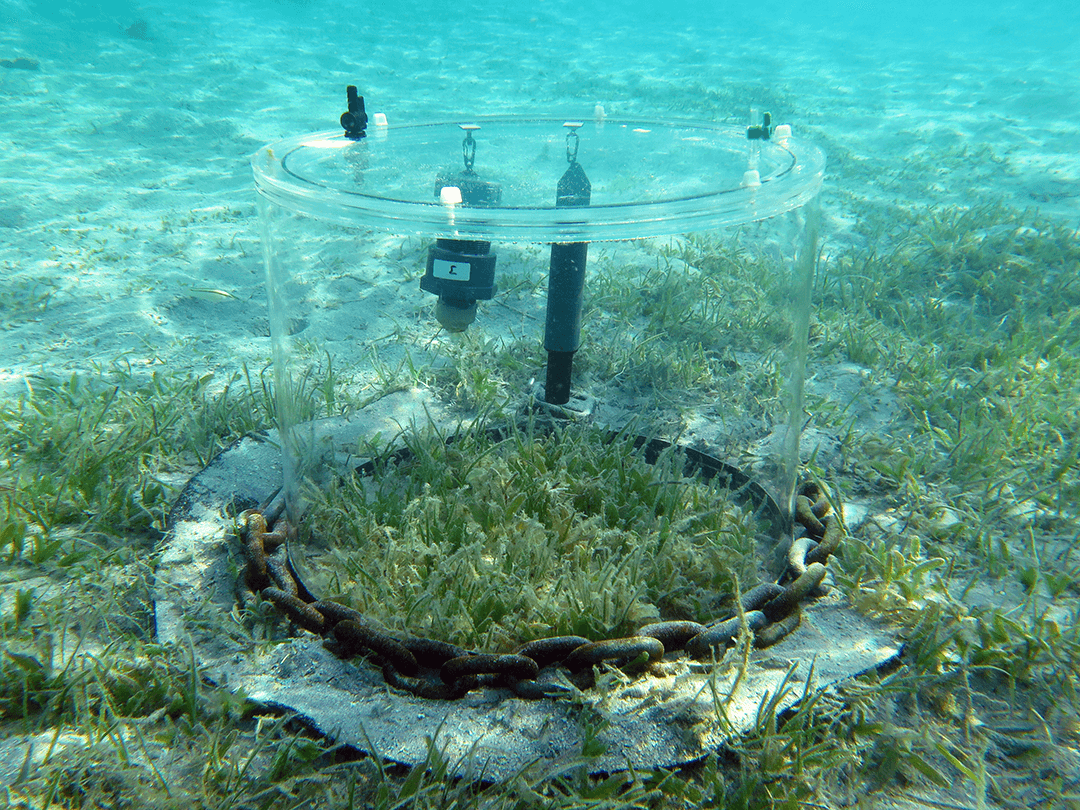 Not only do seagrasses support intense carbon removal and sink, they are a refuge for diverse marine life.

"I love swimming among the seagrasses. It's a peaceful, beautiful experience, and if you are still, you can observe an abundance of marine life. Turtles, dugongs, fish, sharks and many other animals live and feed here," Garcias-Bonet said.

Whereas Red Sea mangroves and seagrasses are relatively stable and even expanding— Duarte's team quantified a 12% increase in Red Sea mangroves during the last four decades—these ecosystems have been significantly reduced in many other parts of the world due to anthropogenic factors such as coastal development, land reclamation, aquaculture—especially shrimp farming—and toxic effluents from industrial activities.

When seagrasses and mangroves are cut or removed, buried carbon releases back into the atmosphere, creating a chain reaction that impacts the animals, ecosystems, and humans that depend on them for habitat and sustenance. Left undisturbed, these ecosystems flourish, as do connecting marine, avian, and terrestrial communities.

Satellite footage and research data of the protected mangroves at KAUST show a 20% habitat increase in the span of a decade. The Department of

"HSE carefully considers any proposed construction on campus, such as new roads, buildings and utilities, for environmental impacts, and regularly assesses the health and well-being of the mangroves for factors such as height and width, disbursement and density, fruiting aspects, and disease," Omar said. 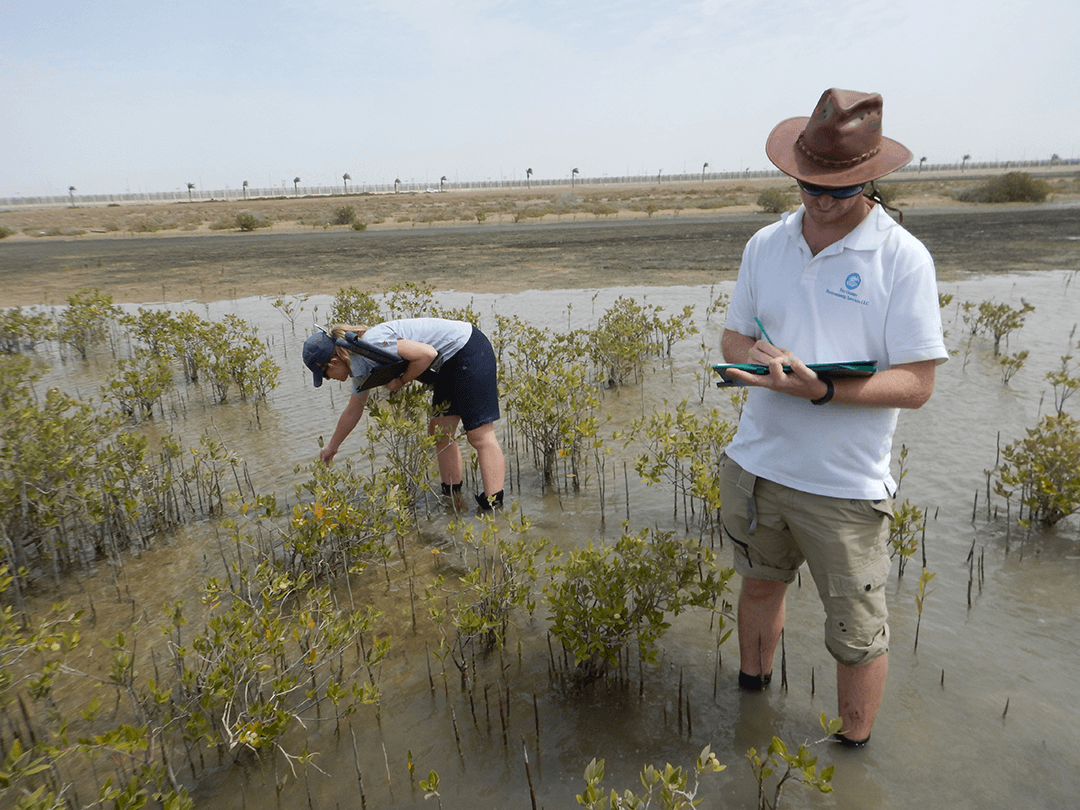 Biologists observe and record new growth and distribution of mangrove trees at KAUST as part of an annual survey. Photo: KAUST

The HSE Department also creates educational opportunities for people to spend time in the nature conservation area and learn about the vast benefits these ecosystems provide. Birdwatching and nature walks are activities that engage the public. Cultivating relationships with K-12 classrooms is another.

Students from KAUST and neighboring schools conduct fieldwork and science projects, and produce educational books and creative media for future generations of students to enjoy. Through its partnership with the Red Sea Research Center, HSE also facilitates networking and shared research expertise. 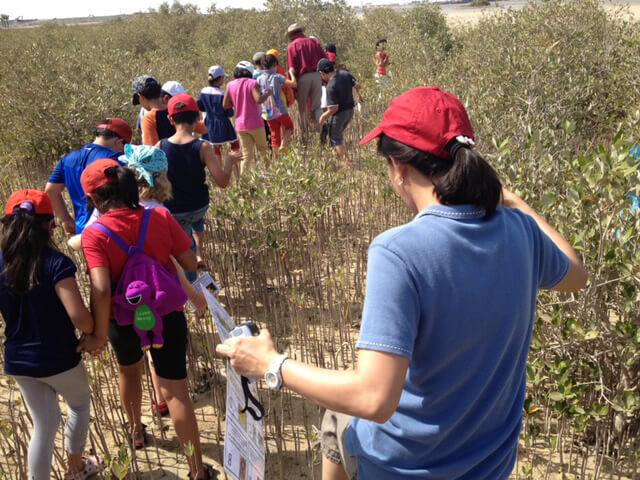 Elementary school students and their teacher head to the mangroves for outdoor science lessons. Photo: KAUST

KAUST is at the forefront of environmentally conscious management plans and green and sustainable projects through innovative research. Its vision and goals are helping to inspire environmental action from leaders in the Kingdom and collaborators around the world.

Duarte commented, "Our research at KAUST has significantly contributed to the global knowledge of blue carbon habitats, and the realization that blue carbon strategies are a leading, nature-based way to mitigate climate change, avoid impacts of sea level rise, and deliver a wealth of benefits to local communities."