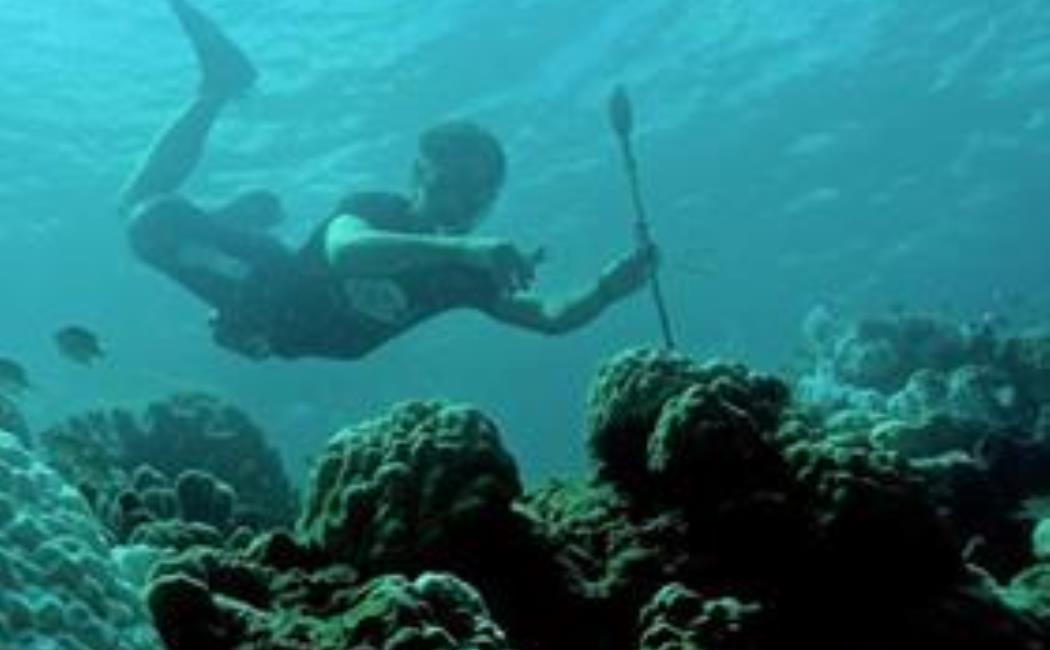 Sclerochronology is not a word the average person hears every day, let alone understands, but for RSRC alumnus and marine biologist Dr. Thomas DeCarlo, the word is at the core of his work. Literally.

Sclerochronology is the study of the hard tissues and skeletons of invertebrates, and in DeCarlo's case, long-lived, tropical corals. He drills, dates and analyzes cored samples from corals to learn how they grow and also respond to ocean warming and acidification. Sclerochronology is one tool in a suite of research techniques that DeCarlo applies to his projects. Carbonate geochemistry, Raman spectroscopy, paleoceanography and remote sensing are others.

DeCarlo is making significant contributions to the field of coral reef ecosystems, with peer-reviewed publications illuminating connections between climate stressors and reef conditions such as coral bleaching and calcification.

"Ocean temperatures are now approaching one degree above what they were in industrial times, with a projected increase of two to four degrees, which could have terrible consequences for corals," said DeCarlo.

"Coral reefs are a nursery and home to many different marine species, provide fish for human communities, and buffer shores from storms. If reefs collapse, so, too, do these biodiverse life systems that depend on them for survival."

DeCarlo attended KAUST from 2019 to 2020 as a postdoctoral research fellow, where he conducted marine science projects at the Red Sea Research Center under the mentorship of Dr. Michael Berumen, the current director of the Center. In Fall 2020 he joined Hawai'i Pacific University (HPU) as an assistant professor of oceanography, and additionally oversees the HPU Sclero Lab.

"KAUST is one of the few, if not the only, places where a state-of-the-art computerized tomography (CT) scanner exists within a couple of kilometers from massive, centuries-old corals," said DeCarlo.

"This unique setting enabled me to develop well-replicated time series of coral growth rates due to the access to local reefs and KAUST's CT scanning technologies."

DeCarlo saw corals for the first time while learning to scuba dive during a college field trip to Turks and Caicos Islands, an archipelago in the West Indies of the Atlantic Ocean. Intrigued by the variety and abundance of marine life and how the reef system functioned, he has been hooked ever since.

He pursued an education in coral reef ecosystems at some of the most distinguished institutions in the world, completing his undergraduate degree in marine science at the University of San Diego, and a PhD in oceanography as part of a joint program between Massachusetts Institute of Technology and Woods Hole Oceanographic Institution.

He also received a prestigious NSF (National Science Foundation) Graduate Research Fellowship at Woods Hole Oceanographic Institution, and, prior to KAUST, a postdoctoral research appointment at the University of Western Australia and ARC Centre of Excellence for Coral Reef Studies.

In addition to conducting research in the Red Sea, DeCarlo has worked in the South China Sea, equatorial Pacific, Turks and Caicos Islands, U.S. Virgin Islands, the Coral Sea, and through his current faculty appointment, the barrier reefs of Hawaii in the Pacific Ocean. 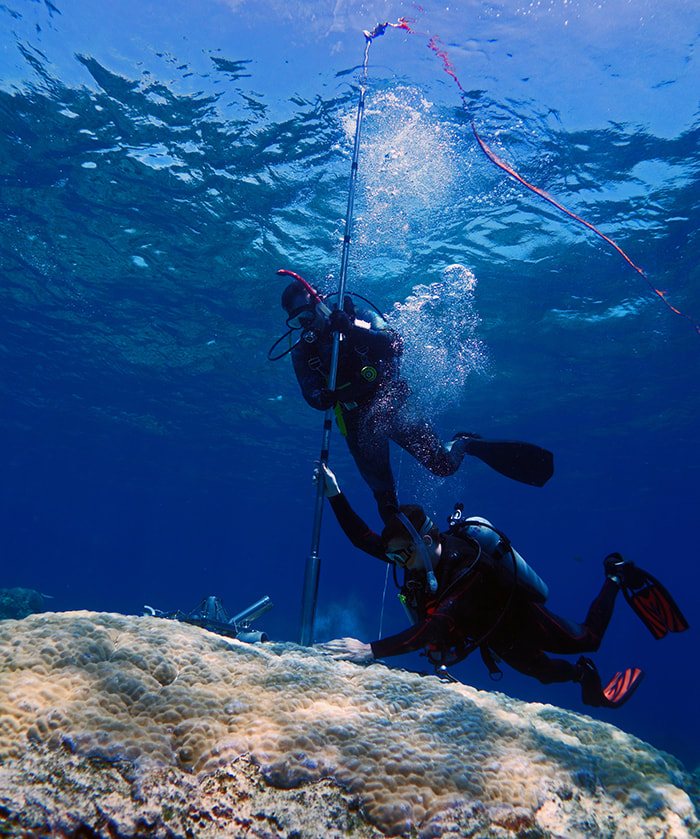 Underwater view of Thomas DeCarlo and a fellow researcher in scuba gear preparing to sample coral cores from a massive Porites in the Great Barrier Reef of Australia. Photo: Thomas DeCarlo

Corals are among the most long-lived species on the planet and can grow to be thousands of years old. More than 300 species grow in the Red Sea. DeCarlo focuses his research on Porites, a genus of slow-growing coral found in most tropical reef locations around the world.

Porites can join to form massive hemispherical colonies across the coral reef. They build their skeletons cued to monthly lunar cycles. Like successive rungs on a ladder, the living coral polyp is built on a thin layer of old skeleton. With each full moon, the coral deposits new tissue called dissepiments, and climbs a little bit higher on the reef—approximately 1/10th of a millimeter.

"Scientists had hypothesized that coral dissepiments form on a lunar basis, but this had not been tested in a formal way. Previous attempts tracked dissepiments over just a couple months," said DeCarlo.

"I am especially proud of my research because it was a first-of-its kind, comprehensive study that took my entire Ph.D.—four years—to complete. It required a lot of patience and foresight."

DeCarlo considers two time scales when analyzing corals. He uses CT scans to assess both monthly and annual growth rates. Annual growth is expressed as paired, banding patterns of alternating low and high densities. Like tree rings, the banding patterns reveal their age and general evidence of climate stressors such as bleaching that might have occurred throughout the year. He then uses a microscope to analyze the monthly growth rates of corals. The skeletal rungs help him pinpoint specific times in which these stressors occurred.

Porites are more resilient to stress than other kinds of corals, yet they are still sensitive to high sea temperatures. Much of the published research on coral bleaching attributes temperature as the cause. DeCarlo has discovered that upwelling of nutrient levels also plays a role and can be toxic to corals.

"Summer monsoons circulate nutrient-dense waters from the Gulf of Aden to the Red Sea. The symbiotic algae that live in corals thrive on these nutrients. In return, they provide food and energy for the corals to grow," said DeCarlo.

The Farasan reefs along the Red Sea's southeastern coast are an example of this phenomenon. Once healthy, this coral system was devastated by a mass bleaching event in 2015. DeCarlo said the reefs there now look like a coral graveyard, and that all of the cores sampled show strong stress bands from that year.

An interesting fact DeCarlo noted is that 2015 was not the hottest year on record for the Red Sea. 2002 was the year for that, and yet only minor bleaching occurred then across the reef. DeCarlo wondered about this difference in temperature history. Why had mass bleaching occurred in 2015 and not other high heat years?

Using satellite data, climate models and other sources, he studied the history of monsoon upwelling, wind patterns and other weather factors affecting coral reef ecosystems in the Red Sea since 1982. He discovered that the bleaching event of 2015 could be linked to a combination of high nutrient levels and weather patterns, not just temperature.

"My research is unique from other studies in this area because it considers a combination of factors that inform and refine what is known about coral bleaching," said DeCarlo.

"In the case of the 2015 bleaching event, my findings were counterintuitive because nutrients circulated by monsoon winds are carried by cool water currents from the deep ocean. But during monsoon season that year, the winds stopped earlier than usual, which then stopped the cooling mechanism. As a result, the nutrient-rich waters of the Red Sea just sat there, heating up." 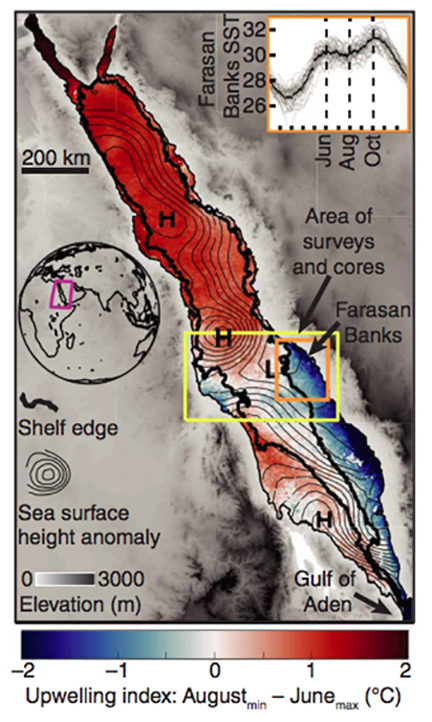 Figure shows early summer upwelling in the Red Sea. SST difference between the August minimum and the June maximum reveals the influence of upwelling. Blue colors indicate upwelling, which is mostly restricted to the southeastern Red Sea. Thin contours indicate climatological SSH anomalies, which show a persistent anticyclonic eddy in the central Red Sea that acts as a barrier to the northward propagation of the upwelling waters. Thick black line shows the 100-m isobath that defines the shelf edge. Yellow and orange boxes show the locations of surveys and coral coring, respectively. Inset time series shows the climatology (black) of SST between 1982 and 2015 (gray) in the Farasan Banks, revealing the early summer decrease in SST due to upwelling. Photo: Courtesy Thomas DeCarlo

DeCarlo attributes the unique climate and monsoons in the Red Sea as factors that propelled his research. Other coral reefs don't have nutrient upwell conditions earlier in the summer and heat stress later in the summer. These distinct processes enabled him to evaluate and separate the effects of these two factors—acting in different combinations in different years—in a way he could not have done elsewhere.

In knowing the history of these corals, DeCarlo said predictions can be made about their future based on different climate scenarios.

Corals past and future

The Saudi coastline of the Red Sea shows several generations of reef formation through time. While at KAUST, DeCarlo was inspired to also study fossil corals. The hundreds of miles of preserved coral skeletons on the shore make the Red Sea an amazing laboratory for research. The oldest fossil coral he dated here is estimated to be approximately 120,000-years old.​

"The Red Sea is the most amazing place in the world to study fossilized corals," said DeCarlo.

"Aside from being covered in dust, these 120,000-year-old corals are pristine, perfectly intact skeletons that look like corals underwater today. I CT scanned them in the exact way I do with the corals growing in the Red Sea. There is a margin of error considering the time scale, but, relatively speaking, it's a pretty close estimate."

In contrast, DeCarlo said that fossil corals from reefs in Hawaii, which date to approximately the same time, are severely degraded and barely distinguishable due to the tropical climate and heavy rainfall there.

While in Hawaii DeCarlo will continue research begun at KAUST, and hopes to also do some coral coring. He said that historical temperature measurements taken in Hawaii from ships suggest that a few years in the 1960s were as hot as a few years from the last decade when bleaching events occurred. He is curious if these earlier warm events also caused bleaching, and thinks he can tell from the coral cores.

Reflecting on his future research path, DeCarlo said, "Ultimately, I want to build a global database of the history of coral bleaching events over the past century, using coral cores to fill in the gaps of when and where people were not underwater to observe the reefs."